Ok parent’s, let’s say you deserve a break, which you do.  Let’s say you have seen all of the animated movies in the theater, you’ve found a baby sitter and you just want to veg out with a tub of popcorn and a diet coke.  Spare yourself the very colorful nap called, Madagascar 3.  Let’s just say I saw it and I needed to watch something that would wash that memory clean from my brain.  Finally, let’s also say you happen to be a Family Guy fan.  Thank you Seth Mcfarlane for “Ted”.

I was lucky enough to be invited to a Sneak Peek of “Ted” and I still can’t shake this mischievous grin off of my face.  First and most importantly, THIS MOVIE IS NOT FOR KIDS!!!  I promise you, you’ll feel weird taking your Lil’ Geek to this one.  When my wife first saw the Trailer she said, “Parker would love that movie.”  Noooooo!  I’m just not ready to traumatize my child with the bad-mouthed awesomeness that is TED the talking teddy bear.  But I very willing to traumatize you adults.

You already know the premise, a cute cuddly Teddy Bear is brought to life by a little boys Christmas wish.  Well after the initial premise begins, (with the narration of Patrick Stewart) Ridiculousness ensues.  For me, it was non-stop laughs.  Some of the funnier moments were in the Red Band Trailer (NSFW), but there were still tons of surprises and Easter eggs for those of us who love the McFarlane Universe.  I won’t give you any spoilers, but I will say, that Ryan Reynolds gives the performance of a lifetime, Flash Gordon has gone from crappy movie that I loved as a child to mythical 80’s  memory that I long to revisit and Mark Walberg is just tops.  Marky Mark’s comedic timing is perfect for the role of John and every time he references his “Teddy Bear” it’s believable and hysterical.

Ted is a romantic comedy/Buddy movie that hits both notes perfectly.  And as we watch Mila Kunis chatting with Ted, occasionally you forget that there is a talking teddy bear and you suddenly realize how outlandish the concept is and you might laugh out loud.

Ted will be a welcome respite from all of the Lil Geek stuff that may have invaded your home.  It’s not a sci fi epic or part of a superhero franchise, but sometimes we all need a good, goofy, comedy.  Whether you view it as a spoof of Pinocchio or a fantastical take on the romantic comedy, I think you might leave smiling mischievously and wondering what life would have been like if your favorite childhood toy had come to life and lived with you today. 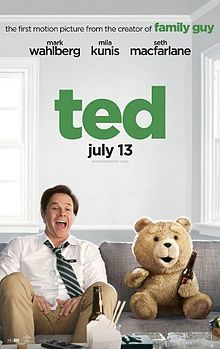 Thanks for reading and remember sidekicks rule.

If you have any suggestions for future articles or comic questions you might want answered, let me know at [email protected]  You can also follow me on Twitter @mylilgeeks and/or @billystrick .