In a ground breaking  Hulk Smash-Up the likes to which the world has never seen, the Avengers brought together a plethura of movies and characters to make one iconic piece of greatness. It’s Friday and that means it’s time for a list. The eightest and greatest movie mash-ups that have never been made.

8.Robocop/Terminator. Not that this could ever happen and the world is most likely a better place without it ever happening, but it would more fun than watching Ed209 fall down a flight of stairs.

Incidentally, The Terminator Annihilates Robocop. The only way Officer Murph survives at all is if friendship or the power of love save him. “I’d buy that for a dollar!”

7. Teen Wolf meets The Karate Kid. I would pay to see this movie. Lets start a Kickstarter. Damn it! Ralph Machio is too old and Micheal J. Fox has parkinsons. Neither are teens, kids, or wolves. BOO. And another dream floats away.

6. The Chronicles of Aeon Flux. Riddick and Miss Flux pitted against each other in a post-apocalyptic future. It doesn’t matter whether the lights are on or off, because both mofos are so B to the A they don’t need all their senses to Eff you up.

5.Resident Underworld: Alice in Lycanland. A team up of undead proportions as two of the toughest females in film smash it up. Zombie dog or half human wolves, Alice and Selene flip kick their way through what ever uni you want, double pistols ablaze. 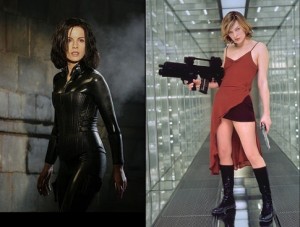 4. Jurassic Park vs Tremors. Dinosaurs against whatever the tremors are. This could be bigger than AVP. This one deserves the Kickstarter. Kevin Bacon isn’t too old. He just played Sebastion Shaw in X-Men:Firstclass. We don’t need any of the cast from JP, the dinosaurs were the stars. Make it happen.

3.  Bridesmaids/Hangover or The Hungover Bridesmaids. Now excluding the squeakquel-esque Hangover sequel, these are two of the funniest movies made in recent years. Highly acclaimed by critics and loved by audiences, Kristen Wiig and Zach Galifianakis, Melissa McCarthy, all you need to do is put them in a room and tell them to wear dresses and get drunk. I’m giggling already.

2. Harold and Kumar Meet Cheech and Chong. I got tingles when this occurred to me.  It seemed so obvious. It has to already have crossed the lips of some very important producers. They had to have joked about it onset of Harold and Kumar 2.If this unholy union ever came to pass the video sells will surpass The Avengers in worldwide profit. I can feel it. Just the DVD sales though. Not blu-ray or box office numbers. I don’t know why. It’s just part of what I feel.

1. Justice League. Maybe Geoff Johns can try out his directing skills and mash up Christian Bails’ Batman with Brandon Routh as Superman. Of course we’ll need a Martian Manhunter movie, Wonder Woman, The Flash, Aquaman, and Cyborg. With CW’s new show Arrow on the horizon and the success of The Avengers this could really work if they’d just give it an honest try. A slower artsy approach, like a garage band or an indy film. We could leave the flash of The Avengers behind and come at this more subtle and serious (not that The Avengers isn’t serious, I LOVED it). It could be what The Hunger Games is to Twilight (they share a large base audience but THG played less on the love and glamour and focused more on the feeling and atmosphere). It could just be different, and great. We don’t need a Kickstarter. We just need Warner Bros to do it. 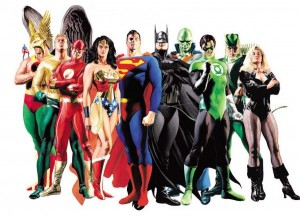