“The Girl Child Has Kept Me Waiting On The Doorstep Like Some Common Traveling Peddler.”

Everybody loves Victor Von Doom. Ok, so maybe I’m forced to say that because I’m writing this article from Latveria. Regardless, Victor Von Doom, or Dr. Doom, is one of the most powerful players in the Marvel Universe. 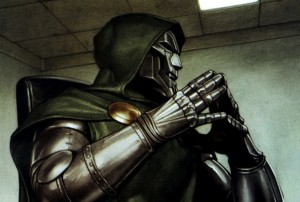 His magic and scientific prowess is matched by few, and his cunning and intelligence put him infinite steps ahead of any threat. But behind the infamous and frightening mask is a deeply scarred individual. Dr. Doom was orphaned at a very young age, losing both his mother and father before he was a teenager. He was driven by his desire for revenge to acquire as much knowledge as possible, and he quickly crafted his intellect to the point of being renowned as a genius the world over. It was at this point that Doom began to manifest behavior traits indicative of Narcissistic Personality Disorder. As I read the definition of this disorder, I realized that Doom fit EVERY characteristic of this personality disorder. Doom has a long standing pattern of grandiose self-importance and exaggerated sense of talent and achievements that dates back to his first meeting with Reed Richards at State University in New York, and one can even argue beyond that meeting. Doom’s reaction to the minimal initial scarring of his face and his refusal to heed Reed’s warning of miscalculation indicates that his narcissism had already developed prior to his meeting with Richards. Nobody can deny that Doom has fantasies of unlimited power and brilliance. One can just look at his behavior since his first appearance and see that Doom also shows an exhibitionistic need for attention and admiration. Doom also responds to criticism, indifference, or defeat with either cool indifference or feelings of rage or humiliation. The final characteristic of Narcissistic Personality Disorder is the most telling. 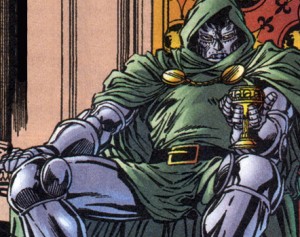 Doom exhibits various interpersonal disturbances, such as feeling entitled to special favors, taking advantage of others, and he definitely manifests an inability to empathize with the feelings of others. At an early age, Victor Von Doom lost his parents to a power far greater than his, thus rendering him helpless to save them. The circumstances of the death of his mother and father led to Doom having a desire to never be helpless again; to never be the less powerful man in the battle. This desire is what laid the foundation for his narcissism, always needing to be the better man in the situation, whether in reality or in his own mind. Without a doubt, Victor Von Doom meets all criteria to be diagnosed with Narcissistic Personality Disorder.

I’m a lifelong comic book fan. Comics pulled me in at an early age, with influences ranging from Chris Claremont’s historic X-Men run, Walt Simonson’s Thor run, Mike Zeck’s run on The Punisher limited series, Jim Lee’s X-Men, the early 90’s X-Men animated series, and the best cartoon ever made, Batman: The Animated Series. As a kid, these comics and cartoons gave me a new world to go to when the real world wasn’t so nice. Because of this, comic books will always have a special place in my heart. I love everything about comics, and still get the same feeling reading them today as I did when I was a kid. My major in college was psychology, so I love to incorporate that into comics.
View all posts by Steven Brewer →
Tagged  4, comics, doom, Dr. Doom, Fantastic Four, FF, marvel, Marvel Comics.
Bookmark the permalink.