Edward Nigma is a super genius that plagues Batman and the residents of Gotham with his nearly perfect crimes. The fact that they are nearly perfect, and not perfect, is not because of a lack of intellect. 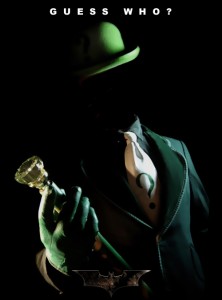 It’s merely because he has an obsession with proving to the world he is the smartest man alive. This obsession manifests itself in the form of complex riddles that he leaves behind at every crime scene. If not for these riddles, he would never be caught. Edward seems to suffer from obsessive-compulsive personality disorder. According to the American Psychological Association’s Dictionary of Psychology, obsessive-compulsive personality disorder is characterized by an extreme need for perfection, an excessive orderliness, and an inability to compromise. Edward Nigma meets all of the criteria. To say Edward is a perfectionist is an understatement. In all of his well thought out plans, he never misses a beat. He’s consistently ten steps ahead of everybody. If one bit of his complex plan is not carried out to perfection, he collapses. This is often times when he is the most vulnerable, and when Batman finally gets him. Yet, despite the enormous complexity of his crimes, they are always so neat and orderly. He lays out each and every step to ensure that his plan will be completed flawlessly. This orderliness lends credence to Nigma’s diagnosis of obsessive-compulsive personality disorder. Edward Nigma would never be caught if it wasn’t for his inability to compromise. 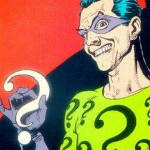 I’m a lifelong comic book fan. Comics pulled me in at an early age, with influences ranging from Chris Claremont’s historic X-Men run, Walt Simonson’s Thor run, Mike Zeck’s run on The Punisher limited series, Jim Lee’s X-Men, the early 90’s X-Men animated series, and the best cartoon ever made, Batman: The Animated Series. As a kid, these comics and cartoons gave me a new world to go to when the real world wasn’t so nice. Because of this, comic books will always have a special place in my heart. I love everything about comics, and still get the same feeling reading them today as I did when I was a kid. My major in college was psychology, so I love to incorporate that into comics.
View all posts by Steven Brewer →
Tagged  batman, comics, dark knight, DC, DC Comics, Riddler, The Dark Knight Rises.
Bookmark the permalink.