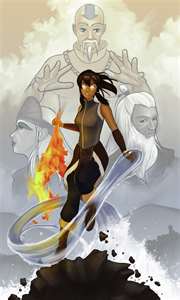 Last week Korranation.com released the first two episodes (with permission and everything) of The Legend of Korra. If you missed it that weekend, you didn’t hear this from me but you can still find them if you look hard enough. I strongly advise you check ’em out if they somehow fall into your lap. Or you can wait until Nickelodean airs them on April 14th.

If you were a fan of the original series, Avatar the Last Airbender, or just always thought it looked interesting then check out this show. It was Awesome sauce with a capitol A. It has a different feel than The Last Airbender and Korra is a hero of a different color, for starters she has girl parts, but the world is just as rich, and the story as the start of an epic journey has a strong base if these first two were any implication.

The show starts with a chubby little baby Korra being discovered in the Water Tribe by Elders in search for the new Avatar now that Aang has passed. She comically busts through the wall shooting fire, water, and rocks at everyone. Cut to present day where a teenage Korra is finishing up her fire bending training. She has mastered three of the four elements and is ready to try and master air. There is only one Airbending Master in the world, Tenzin, Aang and Katara’s youngest and only airbending child. Tenzin is overwhelmed with duties in Republic City (which is the hub of civilization, full of new technologies and machines, and where the four nations coexist under a single banner), so he has little time to train the next Avatar. 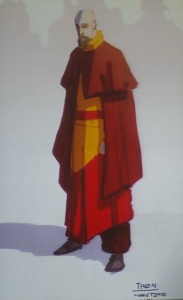 Korra is headstrong and ambitious and ready to take on the world. This could be why she can’t airbend. Where Aang was very spiritual and nieve, Korra is over eager and over confident. We watched Aang grow wise and powerful in three seasons. Korra is already powerful and she understands that too well, putting herself in situations quickly and without thought, losing control.

The general plot seems to be about Korra mastering Airbending and trying to find balance between the world of those who can bend the elements and those who can’t. There is a group of underground rebels (The Equalist) who seek to change the inequality created by

people having the power to bend. 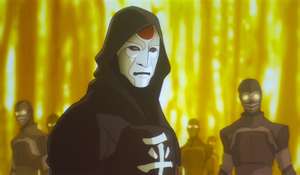 Katara makes a return. That was interesting. She still has hair loopies which was nice. Sky bison still exist and the world, though changed, is still the same. It has to be different though. New Avatar, new 70-year-in-the-future world, it has to be different. Different works though. Micheal Dante DiMartino and Bryan Konietzko returned to create and work on this and I always have high hopes when the original creators come around for the sequel. Even though there were problems, like Tenzin having odd bobblehead like children (they were kinda cute and funny while oddly frightening), it still has my hopes and dreams all tied up in it and I really do expect it to be solid. With a sweet polarbear dog and an awesome starting outfit (never cared much for that orange and yellow budhist garb Aang started with, though he dawned some cool gear later) Korra seems worthy as both a follow up to The Last Airbender and as the next Avatar… so far.