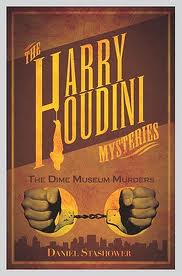 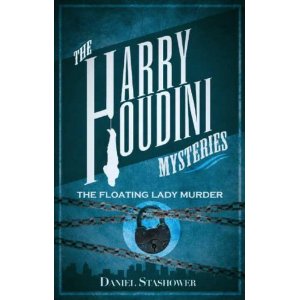 When I first started reading the Harry Houdini Mysteries I wasn’t sure exactly what to think; this was a take on the escape artist I never saw coming. After making it through a couple chapters I started to understand the characters a bit more and the story carried me away.  Here is a quick synopsis:

New York City in 1897 and young escapologist Harry Houdini is struggling to get the recognition he craves from the ruthless entertainment industry. When toy tycoon Branford Wintour is found murdered in his Fifth Avenue mansion, detectives call upon Houdini to help solve this mysterious crime. When Harry and his brother Dash reach the scene of the murder, they discover that Wintour was killed seemingly by a magic trick…

In turn-of-the-century New York City, struggling young performer Harry Houdini is working for the renowned magician Kellar. One night his master’s astonishing illusion the Floating Lady goes horribly wrong, with Kellar’s levitating assistant apparently plunging to her death. Houdini, along with his wife Bess and brother Dash, must solve the mystery and figure out how the young lady died from drowning rather than a fatal fall.

Harry is quite the egomaniac and his brother dash is there constantly trying to keep him on the ground. Since Harry is so sure of himself, many of the comedic situations he and Dash find themselves in stem from the fact that he thinks no one can out think him. To imagine Harry’s character simply think of Sherlock Holmes and take away a little of his general knowledge replacing it with magic and escapist knowledge. The stories are both told from the viewpoint of Dash years after Harry has passed away.

Both of the books paint an alternate past for Harry and his friends; one that lands them solving mysteries that the police don’t want to waste time with. What I found most interesting is that most of the detective work seems to be done by Harry’s brother Dash (who I believe to be the more intelligent of the two) and because of that, Harry tends to lean towards the comic relief. Harry does have some moments where he is the driving force behind the duo and also tends to read people extremely well, yet jumps to conclusions quite often.

My favorite part of both books was the fact that none of the story gives away the ending. Mystery books sometimes give away too much of the facts and you can start to extrapolate the ending even before you reach the middle of the book; this is not the case with these. I felt I was on the same page as Dash and Harry, not ahead of them or confused. Which makes this series pretty good for a reader just diving into the mystery genre.  I was truly surprise by the ending of both books.

With great mysteries and enough interesting suspects /characters to keep you wondering who did it, the Harry Houdini Mysteries series is a great set of books for anyone looking for a little fun mystery. By the way, the first two books of the series are appropriate for young adults in content and size so no worries mom and dad.

Links below for Amazon product pages

A small time blogger with big time dreams and a love for everything geek.
View all posts by Jesse (The Pen of Doom) →
Tagged  book, dash, geek, harry, houdini, mysteries, publishing, review, titan.
Bookmark the permalink.