I’ve been doing Top 8 lists for 30 years and debating them with my best geek friend since I was 10 (Friend, you know who you are). These list are nothing new to the seasoned geek. I have created “Top 8 Superheroes”, “Top 8 Teams”, “Top 8 Books” and even “Top 8 Female Heroes We Wish Were Real People” and plenty of other lists that are probably inappropriate for this column.

What is this list? It’s a list of books I like or my girls like or some future superhero has recommended. If you go to your local comic shop and ask about these books, they will gladly lead you to the shelf space and help you find them. Once you read through them you will hopefully find yourself engaged enough to go back next week and explore that shelf space some more. There is something for everyone and these books are books that will get you started.  So please enjoy my aptly named Top 8 list of Lil Geek Starter Books.

Did your kid like Incredibles? Like Incredibles, Power Pack is the story of family, 4 siblings, 2 brothers and 2 sisters who are given incredible powers by an alien and asked to use those powers to help save the world. But you don’t need to know any background to have a great time with these books. Marvel has been releasing new adventures of the Power family and they are a blast. Team-ups with Wolverine and the Hulk and Captain America all the while being kids and doing what any group of siblings do, argue, love each other and protect the Earth from alien invasion.

Pure silly superhero fun and I’m not sure “superhero” is even the right word here. If anyone remembers the Peanut’s Gang, this is the superhero, comic book version of that. Just like Charlie Brown and Lucy, the Tiny Titans never actually see any adults they just play games and get in disagreements with super villains, while all the time, looking adorable in their costumes. The characters are actual DC comic characters but in this book they are all in pre-school or a playground or just being silly. It is a lot of fun and very fun to look at.

SUPER DINOSAUR! Do I really need to explain this one?

The easy explanation is that this book is about two sisters who gain super powers, decide to put on costumes and then go kick some ass. But it’s so much more, it’s about friendship and responsibility and growing up. One of my favorite things about this book is that the main characters are girls. Kids want to find characters to identify with and girls need more girl lead characters. Thanks Takio.

4. The Astonishing Secret of Awesome Man

What little kid doesn’t love a superhero with a pet dog? This is not a comic book, but you may still be able to find it in your local comic book store. Awesome Man does exactly what you would expect from a cool superhero, but he has a dog and an astonishing secret. It’s more of a children’s bedtime story than a comic book, but I love it and I think your kid might too.

3. Wolverine and the X-Men

If you have seen any X-Men movies you might wonder why I would add a book that is about a man who stabs people. This book is not about Wolverine. In the Marvel Universe Wolverine is currently headmaster of the Jean Grey School for Gifted Youngsters. This book is every Harry Potter fan’s cool comic book retreat. The school is located on top of a living island who also happens to be a student and the halls are filled with aliens, mutants and Middle school crushes. The best part is that the students and some of the staff are on twitter and fully interactive. Such a blast you will find it hard not to read along. 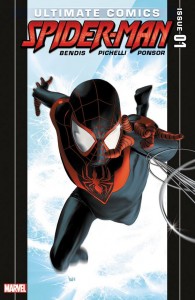 Comics can often be accused of being too complicated. Well this is your opportunity to jump in on the ground floor as a new legend is born. First I want to assure you Peter Parker is doing just fine and still web-slinging in comic books. Marvel Comics has a line of comics called Ultimate Comics and they are re-telling or re-imagining of classic ideas and Spider-Man is the gem of that line. There are 10 years of stories here depicting Peter Parker as a younger character, but more recently a even younger character has taken on the webs. Miles Morales is 13 years old and just like Peter Parker, he has been bitten by a radioactive spider and that’s where the similarities end.  Any lil geek nearing the age of Middle school will be fascinated by the adventure of this super young Spider-Man and his best friend as they try to figure out how Miles can fill the shoes of the world’s greatest superhero.

I can’t oversell these. The Marvel OZ books are unbelievable. You and you kid will just page through just to look at the pictures and you should because they are beautiful. The great thing about the OZ books is that they tell the original book versions of the stories of OZ. It will be so much fun for you as a parent to read through these with your child and recognize where the classic movie diverged from the actual books. And after you have read the Wonderful Wizard of OZ . . . . . there are more. More beautifully drawn stories based on the Land of Oz and Dorothy. This book is not about superheroes but lately it’s been my favorite. 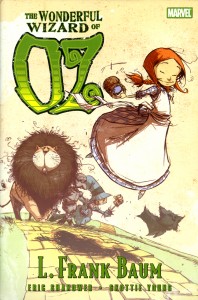 So there you have it. Your homework is to go visit your nearest comic book shop (Click here to find the shop nearest you) and have fun looking through the racks of awesomeness. As you find yourself overwhelmed by the number of books, ask someone to help you find anything on this list. I promise you they will make some other recommendations. Pick up something you think your kid will like and give it to your kid when you get home and suddenly you will become as cool as the characters in the books because instead of the usual boring stuff you bring home, you brought home Comic Books.

Until next time remember, Sidekicks Rule.