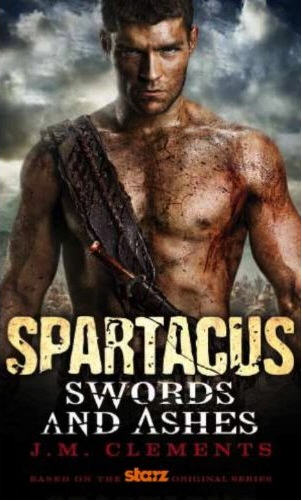 Spartacus is the hit TV show which combines blood-soaked action, exotic sexuality, villainy and heroism. This original novel from the world of Spartacus: Blood and Sand tells a brand new
story of blood, sex and politics set in the uncompromising, visceral world of the arena.

The gladiator Spartacus, the new Champion of Capua, fights at the graveside of a rich man who was brutally murdered by his own slaves. Seeing an opportunity, ambitious lanista Quintus Batiatus plots to seize the dead man’s estate.

In the arena blood and death are primetime entertainment. But not all battles are fought upon the sands…

I am a huge fan of the Spartacus series on Starz.  I truly enjoyed the first season and couldn’t contain myself when the second season was released.  For any fans of the series that enjoy the violence, treachery, and sex that it brings to their TV, you won’t go wrong in reading Swords and Ashes from Titan Publishing and J.M. Clements.  As the synopsis says, this book takes place right after the fight that made Spartacus the “Bringer of Rain” against the “Shadow of Death”.  Batiatus is up to his usual tricks to squeeze as much coin as possible out of every situation in front of him.  Swords and Ashes also adds a mystery element to the Spartacus story line that fits extremely well and makes the book all that much more interesting.  This story is a great bridge between two key points of the first season and with Varro still around everyone who loves Spartacus should be able to grab this book with no questions asked.

To buy or not to buy?  If you like the series or blood, sex, and violence; buy it.