Concluding my three-part review of the Image/Top Cow Comics’ series Weapon Zero consists of issues nine through fifteen with an interlude of the Marvel/Top Cow crossover Devil’s Reign, which I will touch on briefly.

The Weapon Zero team is starting to fall apart as the series moves into its penultimate story arc.  Jamie, the Englishmen, takes the opportunity of a battle situation where the team teleports away to extricate himself from their presence.

On his own in Los Angeles he ends up getting in league, unwittingly, with a T’srri agent working for N’golth.  But before that is unveiled the story merges with the crossover. 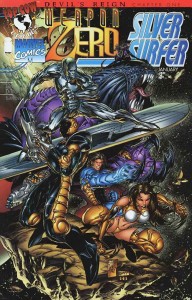 Marvel and Top Cow’s crossover, Devil’s Reign was only mildly on my radar at the time it happened because it involved my all-time favorite Marvel character, the Silver Surfer and his nemesis from the underworld Mephisto.  Mephisto uses a mixture of his own powers and some stolen from the Silver Surfer to leave this dimension and enter the one inhabited by Weapon Zero.

(it’s important to denote the use of dimension and not universe, since the universe is the whole of space whereas dimensions are parallel existences of the same universe with varying characteristics – thus ends nerdy science lesson)

Mephisto uses his power and influence to side with the T’srri and create a “new eden” on Earth with which to lure hopeless souls for him to corrupt and steal.  He is, of course, foiled by the likes of Weapon Zero and the Silver Surfer.

Along the way the Weapon Zero members interact with other entities within the Top Cow universe, such as Gen 13, as is commonplace in comics to this day. 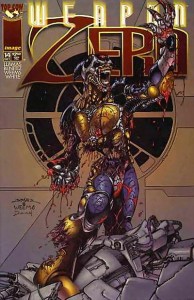 The truly unfortunate part of the series, which from a science fiction comic book fan’s perspective, was the lack of imagination in the use of the characters and the possibilities for the story itself.  Simonson truly played it safe throughout by sticking with tried-and-true team book storylines instead of utilizing the unique characteristics of the players in the book.

Issue fifteen, the series finale, was possibly the biggest disappointment.  It’s an extended issue to allow for the wrap-up of some hanging story arcs, such as the betrayed T’srri from their home dimension, the conclusion of the N’golth story and the general conclusion of the story itself. 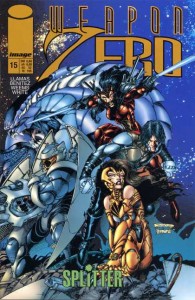 To put it mildly the ending is weak as hell.  It feels incredibly rushed and sloppy.  And the sacrifice made is meant to inspire a feeling of sorrow in the reader but the gesture is lost because Simonson has done more to make us dislike the character than endear us to him or make us think him capable of the event itself.

Clearly the ending was not how it should have gone and it leaves things to unfinished as to make you believe that the story could continue with the remaining members, but clearly it did not.

It is unfortunate that a general story idea with such potential was wasted in this way, but such was the way of things during this era in comics.  Companies were willing to put out a myriad of things that wouldn’t fly in today’s market but then either the editor would pull back on the reigns or the writers failed to live up to the potential.  Now, granted hindsight is 20/20 but as a critic it’s impossible for me to just let that go.

Overall Weapon Zero grades out at a C- due to its lack of imagination, sloppy conclusion and annoying infusion of teenage drama mixed with insufferable adult rage-about-nothing.

I hope you enjoyed my review of Top Cow’s mid-90s series Weapon Zero.  Check back next week when I make the transition into a very, very different book from the long defunct Caliber Comics.

If you have suggestions for future Bin Fodder reviews, drop me a line in comments!  Also, see below for the return of the Playlist!

Further Seems Forever – Light Up Ahead, Daphne Love Derby – Hopeless Love, Hey Mercedes – Lashing Out, Ben Folds – Trusted, Interpol – Next Exit, 15 Minutes Late – Is This How You Feel?, The Get Up Kids – Last Place You Look, Interpol – Pioneer to the Falls, Elefant – Tonight let’s Dance, The Ghost – On and On, Live – Century