As I sit down to write the final edition of OFF THE RACK it’s both a proud and sad day.  Proud that I successfully launched a second weekly article on the site and have watched it become decently received by fans.  A little sad that this will be the very last written edition of the article.  Starting in 2012 OFF THE RACK will be transitioning into a monthly podcast with a broader view of the comics industry with several members of the 8DaysAGeek staff on board for the talks (trust me, no one wants to listen to me for an hour on comics). 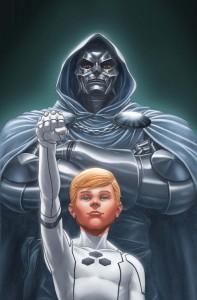 For my final issue I went with a wildcard, in two ways.  First, I picked issue thirteen of a comic (notoriously a bad number) but generally a good issue because it usually means the comic is at least successful enough to have lasted more than a year.  Second, I picked a Fantastic Four book; a title I have not been involved in since that terrible “Heroes Return” storyline years ago.  Even when Warren Ellis (admittedly one of my top 5 favorite writers of all time) wrote an arc on FF I didn’t pick it up.

This issue appealed to me, first and foremost, with the cover which is emblazoned with a still-young-but-aging Franklin Richards on the cover standing before the ever-imposing Doctor Doom.  Franklin has one arm raised with his hand curled into a fist, seemingly to imply that the action is some sort of salute to Dr. Doom, perhaps? 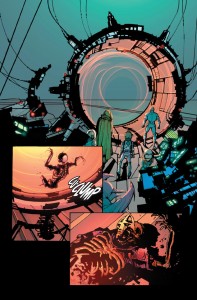 Turning inside I found the art of Juan Bobillo and the colors of Chris Sotomayor to be incredibly well detailed and truly enhanced the reading experience.  Which was beneficial because even with the first page explanation (which truly needed its own explanation of the explanation for this woebegone FF reader) Jonathan Hickman’s writing made my head spin at times.

Not to drop to much knowledge on you, for those of you who have not been reading the series, but apparently there are several Reed Richards’ running around and Doctor Doom is both evil and good at the same time.  He and Franklin are buddies…sort of.  And there are a ton of characters whom I had no idea who they were and no specific explanation of their involvement or connection to the mainstream characters was provided. 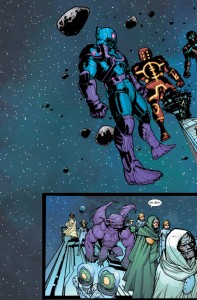 That being said, none of this is a detriment to the issue as, like I said before, it’s issue thirteen and I don’t expect to be able to pick up the issue and understand everything, I just need to understand enough not to feel completely lost and hate the reading experience because of it.

This issue accomplishes the latter with amazing visuals, a cool story with very interesting scientific-mixed-with-science-fiction theories and (one of my favorite characters in the Marvel Universe) Celestials!  Celestials are mysterious and as such underused characters in the Marvel U.  I can appreciate that and always enjoyed when they showed up in issues of Silver Surfer.

As I conclude this article, let me leave you with some final thoughts.  It has been my pleasure to go out into the comic world each week and scour the shelves for interesting books to bring to light.  I have found some gems (Green Wake and The Red Wing) and there have been some crap (Kult and Spider Island).  And that’s the comic experience when you’re basing your selections on a few designed variables (appeal of art, possible interest in the characters, etc.) without asking the advice of anyone else in the industry.

My recommendation for you all is twofold.  First, continue to be involved in OFF THE RACK as it transitions into podcast form as it will grow and become even more insightful about the world of comics.  Second, go out and explore your local comic shop shelves with a critical eye of your own and try to find you’re OFF THE RACK book each week.  Be inspired to trust your instincts and go out on a limb to try reading new things.  It may suck sometimes but you never know when you’ll find a gem (like THIS book).

Until we meet again, in Podcast form!