Netflix decides not to split after all… And they’re still sorry. 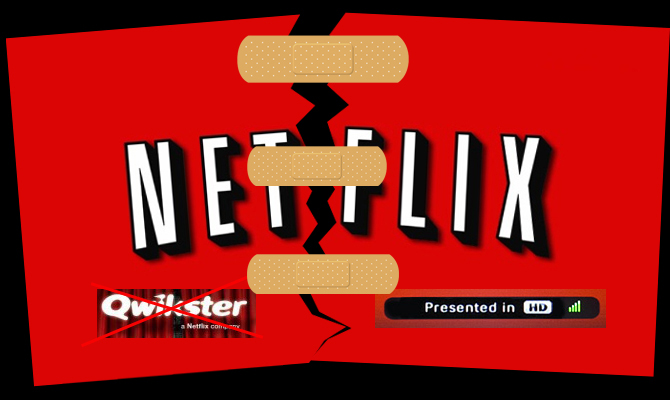 After hearing the outcry of thousands of its members, Netflix has decided that maybe splitting into two isn’t as good of an idea as they first thought. Here is the email that they are sending to their subscribers:

Dear Jesse,
It is clear that for many of our members two websites would make things more difficult, so we are going to keep Netflix as one place to go for streaming and DVDs.
This means no change: one website, one account, one password…in other words, no Qwikster.
While the July price change was necessary, we are now done with price changes.
We’re constantly improving our streaming selection. We’ve recently added hundreds of movies from Paramount, Sony, Universal, Fox, Warner Bros., Lionsgate, MGM and Miramax. Plus, in the last couple of weeks alone, we’ve added over 3,500 TV episodes from ABC, NBC, FOX, CBS, USA, E!, Nickelodeon, Disney Channel, ABC Family, Discovery Channel, TLC, SyFy, A&E, History, and PBS.
We value you as a member, and we are committed to making Netflix the best place to get your movies & TV shows.
Respectfully,
The Netflix Team

So there you have it, no Quickster.  Funny how they didn’t mention the video game rental service Quickster was supposed to bring with it.

You can read the original article here.

A small time blogger with big time dreams and a love for everything geek.
View all posts by Jesse (The Pen of Doom) →
Tagged  movie news, Movies, Netflix, News, split, tech.
Bookmark the permalink.