OFF THE RACK: Witch Doctor Issue 3 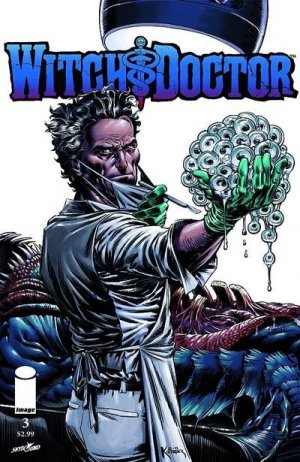 Finding a good horror comic book is kinda like finding a lasting relationship in high school.  They’re exceedingly rare and often come at a cost to your social status.  In this case I think the writer surpassed my expectations and thankfully the cost on Witch Doctor was nominal as books go.

First, let’s talk about what drew me to the book initially.  The cover is pretty amazing as eye-catchers go.  We see a scaled beast with huge teeth laying on a table, chest splayed open with the doctor standing over him holding (supposedly) the contents of the beast’s stomach.  Are they eyes?  No, they’re fish eggs!

Moving on to the interior, the art is solid.  I was impressed that the artistic style really matched the overall theme of the book.  The characters each look haggard, with very visible cheekbones, almost to appear emaciated.  But really they look straight out of a Bela Lugosi movie.

The book itself contains so much information it’s hard to know what to tell you and what to leave for you to experience for yourself. 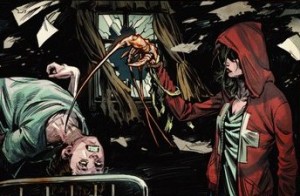 I’ll start with the players: Dr. Vincent Morrow, he’s the actual Witch Doctor.  He pulled Excalibur from the stone, thus making him destined to be a defender of the Earth.  Then we have Abby O’Riley, curator Museum of Supernatural History.  She is the one who brought the creature to the good doctor.  Dr. Morrow’s assistant is Eric Gast, a paramedic who has been hired to watch over the doctor’s experiments and help out when he can.  Finally we have Penny.  Penny is a cryptophage, which means she eats monsters.

What really pulled me in to this issue as I was flipping through there are several pages which are comprised of a Jonny-Quest-style filmstrip depiction of “Archeons” coming to earth, killing the dinosaurs, transforming it to a more habitable planet for themselves to exist in and then going dormant. 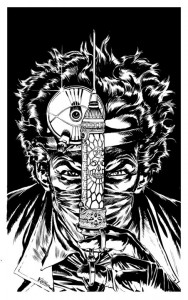 Any good horror story worth its salt will include at least a few moments of humor.  Witch Doctor doesn’t ignore the opportunity when the team stumble upon a vast lair of sea people and Dr. Morrow is left holding the bag as his ace-in-the-hole has already run out on him.

Witch Doctor is my favorite OFF THE RACK book to date.  I was very impressed with the story, art and overall quality of the book itself.  I gets an A+ grade from me!

Check back next week for another all new issue review!

Store Review: Witch Doctor was purchased at the Wheaton, IL location of Graham Crackers Comics.  The store, is probably best known for their gaming tournaments.  If you’re a fan of Magic or HeroClix then this is the place for you.  True to the Graham Crackers style, the store maintains an impressive assortment of new comics, with an entire wall dedicated to DC as you walk in.  They also have an impressive assortment of graphic novels and back issues.  If you’ve never been, I recommend checking it out!