Gears of War 3: The Mega Review

Let me start out by saying this: Gears of War is my favorite game series for the 360. I love the game series; I judge the series Very Harshly. There’s a lot for it to live up to, you know! Now, to the review.

Since the first game, Epic has done a good job of building on their original story and increasing the quality of the campaign. Epic does not disappoint with this newest campaign. It is not perfect, but it is really good. There are a couple of very frustrating points in the game play, some slow points that go on a little longer than necessary, but the story itself is solid. Karen Traviss, author of the Gears of War books (and some Star Wars, Halo, etc), takes over the writing of the Gears 3 campaign and I have no complaints with the direction she and Epic took. (Well, I have a few, but it’s not about the quality.) 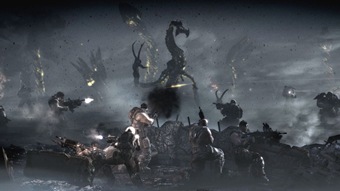 The humans and Locusts are still fighting each other and they’re both fighting the Lambent, a now highly evolved product of the Imulsion, that’s been driving the Locusts from above ground (starting with E Day) for years and years. Sera is in ruins, from Hammer strikes and Lambent stalks and Locust attacks, with its oceans being occupied by ships with the remaining humans and the more stubborn stranded trying to remain on solid ground. The Imulsion is infecting everyone – Locusts and Humans, and someone from Marcus’ past gets in contact with him and says there might be a solution that would give the humans a chance to actually not go extinct.

You travel through some amazing looking places. There’s a ton of variety—from ashen cities destroyed by numerous Hammer strikes to untouched islands protected by a literal maelstrom, through cities of characters’ pasts that bring up good and bad memories. In the book that came with the Epic edition of the game there’s a section describing what direction the art directors took, and they specifically mentioned lighting. It is fantastic. There’s a world of difference between Gears 1 and Gears 3, and even Gears 2 and Gears 3. Overall,

the environments are all distinctly different and beautiful and ugly when it needs to be.

I can say the same goes for character design, specifically enemies. My new least favorite enemy is the Armored Kantus. My new favorite character is Clayton Carmine (obviously). There’s also a couple new characters from the books that show up, and even a few that show up in the cut scenes that are from the series but not playable.

Get used to using the Hammerburst just as much as your lancer, especially with the lack of ammo in certain parts of the game. There’s a new shotgun, the Mauler’s cleaver, a two man mini gun and too many new things to list that will make replay value for this game pretty high.

Are you wondering what the difference between Arcade and Standard mode is yet? It’s simple: Standard is regular ‘ol campaign. Arcade is campaign with handicaps. Set up different objectives, like less ammo drops, tougher enemies, with Arcade and play through select chapters on the campaign with friends in a public game or start a private game. (You can do the same with standard private and public games.)

My suggestion: definitely play the campaign first. It’ll take about 12 hours on hardcore, if you’re anything like me. I’m kind of a slow player at times, though. Arcade is proving to be challenging and interesting, and worth the time to go through with friends.

Something to collect, other than achievements. For any completionist, you’ll be spending a lot of time getting

the hundreds of new shiny things Epic added. Badges are added to your title during multiplayer, unlockables unlock weapon skins, execution moves for every weapon available (literally, every one), characters, etc. Ribbons are for your own record and help contribute to badges.

Badges have multiple levels which are accessed by achieving certain game objectives. If you play Halo: Reach, and some of the other ones, you’ll know exactly what that are. It’s another level to multiplayer, which I don’t hate, but I don’t pay too much attention to either.

There’s a variety of versus modes, just as in Gears 2. They’re all right, but I have to be honest and say I don’t play them very often. King of the Hill involves taking over the active circle in the map and defending it from the enemy team for a certain amount of time. It contains unlimited respawns, just like Capture the Leader, which involves taking the enemy leader (either Queen Myyrah or Hoffman) and holding them captive for a few seconds.

Wing Man, Execution, and Warzone are a little more difficult. You only get one life, so you better go kill everyone else first. For those players that want a few more lives, but not unlimited respawns, there’s Team Deathmatch. Each team gets 15 respawns. During the beta, it was my favorite, second to King of the Hill.

Much like original Horde, you represent the humans and fight against the enemy hordes until wave 50. I haven’t gotten past 30 myself, as of writing this, because it’s hard. Were you fighting Brumaks and Berserkers and huge Lambents that throw imulsion bombs at you in Gears 2 Horde? No! Fun, frustrating, time stealing.

Unlike original Horde, instead of points you earn money. Spend money on barriers, decoys, guns and other fortifications. The more money you spend on those items, the higher level they become and the more damage they can take from the (quite) tough enemies. It takes a little while to get used to, but it’s a neat little addition to the game mode. To be honest, I didn’t like it at first, but it’s grown on me. The enemies are tough and varied, with some enemies only showing up on certain maps. Personally, I still prefer Horde 1.0, despite its many flaws, but 2.0 has more improvements then backslides.

Play as a Locust character and KILL ALL HUMANS! With twelve levels of increasing difficulty, this is a lot of fun. You start out with a small amount of money (instead of points), buy the character you want to play as, and kill/destroy as many barriers and humans as possible to add more money to your score. It starts with 60

seconds, and with each kill you add more time to the clock. Every time your little beasty dies, you respawn and buy another and continue the massacre. As you progress through the levels you unlock different Locust characters of increasing toughness (and cost) to kill the heroes.

The heroes are your main Gears characters, and are smarter and tougher than your stranded humans. Prescott and his Onyx guards are the last enemies, and they’re tough… but you’re tougher, especially if you are unable to unlock the Berserker. I had no idea what I was getting into when I started up Beast Mode, but I’m really glad I did. Loads and loads of fun.

Overall? If you’re into the third person shooter genre, you must play.

(Also: Clayton Carmine is my new video game boyfriend, so step off, ladies and gents!)