Off the Rack – This Week in Comics

So here I stand (or sit) on the precipice of a new venture into the world of comics and you, yes YOU! get to be part of the splendid rollercoaster ride.

What is Off the Rack?  It’s a new weekly column wherein I will be exploring comics from a different perspective.  The plan is perfect in its simplicity: each week I will go to the comic shop, wander the new release racks and look for something to catch my eye.  Invariably there will be numerous books that do this so then the process will be to pick up each one up in turn and give it a quick flip-through.  In the end I will walk out of the shop purchasing just one comic.

You may be asking, what is the point of the column?

It’s a two pronged view.  First, I am going to come at this from the perspective of a reader unknowing of the comics themselves.  How will I accomplish this?  Clearly, I read comics (I write Bin Fodder on this very site!) but in preparation for this kind of undertaking I have removed myself from the purchasing of new comics for the better part of a year now.  Second, the comic book industry is facing a fundamental shift in the way they market to audiences.  Covers are their first line of offense; covers are what will suck potential readers in.  After that, if a cursory review of the art and writing doesn’t completely turn the reader off, a purchase is almost assured. 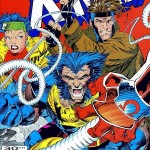 How do all these things factor into the overall reader experience?  That’s another part of what I intend to look into here.  If the book looks interesting enough to pick up and then the inside product doesn’t look like a bastardized version of what the cover depicted (as in the case of the picture shown here, the cover is a fallacy) then it’s worth a read.  After reading the book I will be able to create a well-rounded view of the complete product.

Now that the explanation is out of the way, let’s delve into the first two issues I am going to review.  Yeup, that’s right…I’m launching with a double-sized article!

Dark Horse Comics released Kult issue one last week.  In promotion of the book Dark Horse posted a six page preview of the book on their site. I was initially drawn to Kult because the cover is, inarguably, eye catching.  As you can see from the insert, a man is fighting a demon whose tongue has lashed out and wrapped around the man’s arm.  It’s a pretty appealing cover to the fantasy story lover in me.  The cover is by Jake Murray, clearly a talent; unfortunately it was the best part of the book.

Kult, as it turns out, is an already known commodity in the RPG universe.  This was something I did not know when I picked up the book, thus making it the perfect first example for this column.  The tone, structure and writing of the issue makes a little more sense now that I understand this fact.

Most comics are trying, or at least should try, and reach outside their niche market.  But Kult fails in this regard.  From the opening pages you are launched into an already revolving world, which in many cases can be very cool.  I tend to like books/movies/comics that do this…when it’s done well, that is.  However, this one is more than a little confusing (at least for a non-seasoned Kult reader) and it only spirals out of control from there.

The emergence of a trio of unknown persons in the waning pages of the issue who come to collect the main character, Thomas Zenk, are clearly there for a purpose and speak in convincing abstract and vagaries that imply some measure of import to the story.  However, as the issue concludes they have performed some kind of “spell” on Zenk and a massive amount of energy is released from his person.

None of this makes any sense. 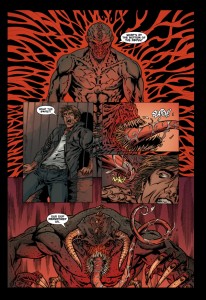 I understand that in a story that is meant to span many issues you can’t give away the farm with the first issue, but it should at least be something where the general reader can follow along.  Otherwise there is truly no incentive to purchase the next issue because the story thus far is more annoying in its curiosity than it is desire-for-more inspiring.

I haven’t decided on a grading scale for books yet…it’s still a work in progress, but for now this book gets a D.  The only thing keeping it from an F is the really incredible cover.

The second book in this inaugural edition of Off The Rack is Image Comics’ The Red Wing issue two of four.  This mini-series is written by Jonathan Hickman (who some of you will remember is the writer of the book Transhuman which I reviewed for this site earlier in the year) with art by Nick Pitarra. 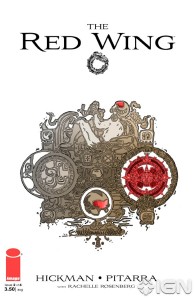 I was drawn to the book because the cover is intriguing in its delicate simplicity.  As you can see it has a matte white background with what would appear to be Mayan-like glyphs as well as an interesting styled helmet.

The issue starts with a well-designed action sequence to draw you in.  It does not necessarily imply that you need to understand why it’s happening since less than three pages in you find out it’s a simulation.

In this world/universe-gone-wrong there’s an evil out there trying to overtake humans, or at least ruin them.

What you learn pretty quickly is that technology in this universe is beyond anything we can even comprehend, where time-travel is not only possible but ordinary enough to be part of battle tactics.  There’s a portion of the issue where one of the characters is explaining time and how it must be understood and visualized in order to properly operate the battleships that are used in this modern warfare. 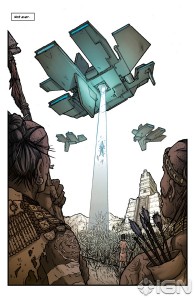 The issue itself has two linear stories running through it.  One takes place in “present or now time” and the other takes place in “previous or then time” and as the issue ends it seems clear that the two are on a collision course to quickly run headlong into one another.

The Red Wing accomplishes what Kult failed so spectacularly at doing: it made me want to read the next issue.  Not because it was so confusing that I am hoping for the clarity that would almost certainly be lacking from Kult 2, but because I have been successfully pulled in by an interesting and intriguing story that commanded my attention from panel one.

The grade on The Red Wing issue two is easily an A.

I hope you enjoyed this first edition of Off the Rack.  Keep your eyes glued to 8daysageek for next week’s column!