OFF THE RACK: A Skeleton Story

I’m going to be adding a new feature to OFF THE RACK starting this week.  I will be spotlighting the store/locale in which I purchase the comic I am going to review.  In the first three weeks of doing this article I have ventured to four different stores.  I had been to some of them before, many times.  But it’s different going to these stores now.  I am looking at the shelves with a keener eye for something…intriguing and not just what’s familiar.

The reason I have decided to spotlight the stores is because it became clear as I went from shop to shop that the selection varied wildly, even between locations of the same chain of stores.  This has piqued another interest in my mind…the marketing of comics in and at specific locations…why?  Why would a shop ten miles away from another shop carry such dramatically different books?  For now, I will simply provide you with the information I do have, in the conclusion of each review. 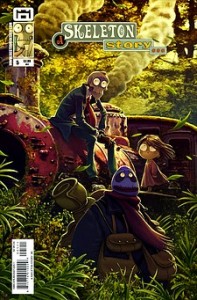 In this week’s edition of OFF THE RACK I have taken another step further into the independent realm with the Italy based company GGStudios book A Skeleton Story issue five.  First off, the premise is cool to me.  Second, as you can see from the cover the art is very impressive.

Having done some additional research about the story/title after picking up the issue I found that this is an app game turned comic, which is something that has been happening more and more lately.

Having visited the GG Studios homepage two things become clear: A Skeleton Story is very different than what that company normally produces and also that they aren’t promoting this book on their site, at all.

That being said, the book itself is solid.  I was initially drawn in by the cover art and the fact that the production house is a company I haven’t ever heard of, which is kinda saying something.  And after picking it up and flipping through the pages giving a cursory glance at the general feel and tone of the story I was sold. 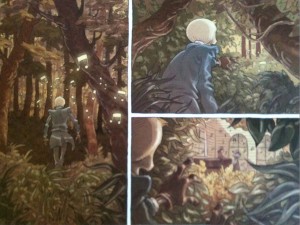 Understanding that I am coming in at issue five I expect not to understand everything that is going on.  But this issue has a general theme, clearly part of the bigger story.  At the beginning the main character, Will, is looking for his partner “Sasquatch” and his ward, “Little Girl”.  Immediately the setting transitions into a series of flashbacks where he encounters his little sister as well as a host of other family and friends along the way.  The one person who never appears is Isabelle, presumably a lost love.

As the story moves along we see the villains enter as they are tracking an intruder into their world of the dead, a cat.  But it turns out that the cat isn’t the only living thing to have gotten lost in this realm.  The villains want the intruder; what is Will going to do? 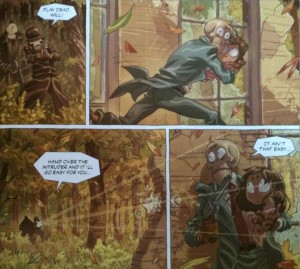 The issue ends on a cliffhanger which is commonplace with independent comics, a hook to bring readers back.  I was genuinely intrigued by this story.

The plot/environment is by Alessandro Rak, who also created the app game.  He teams with Andrea Scoppetta on the layouts and colors.  I feel it’s a benefit, at least in this instance, that the creator of the characters is playing such an important role in the production in another medium.  Clearly Rak has a good feel for his character creations.

Based on the premise of this being a reality of dead people still “living” and existing with purpose, the structure and execution of the issue and the art, A Skeleton Story issue five receives an A grade from me.

I hope you enjoyed this week’s OFF THE RACK.  Check back next Thursday for an all-new review!

Store Review: the location A Skeleton Story was purchased at is called Dreamland Comics located in Schaumburg, IL.  The store is small, and a bit cramped because in today’s market if you’re not catering to everyone you’re catering to no one.  When you first walk in you are greeted by action figured on the wall immediately proceeded by the “new comic” racks.  Among the “new comics” is a healthy dose of independent issues to go along with the mainstream staples.  In the middle there are free-standing shelves stacked with graphic novels.  In the back are the supplies and along the opposite wall from the “new comic” racks are back-issues and collectibles.  Altogether Dreamland is a quality comic shop that I would recommend to anyone.