With DC Comics launching their massive Reboot today I felt compelled to take a look back at arguably the greatest story in DC’s past…or future? 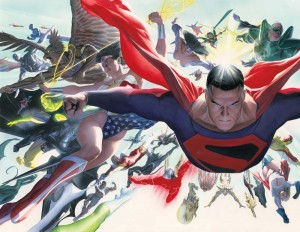 Kingdom Come is, I’ll grant you, an “ElseWorlds” line book and not within accepted continuity of the DCU.  But that doesn’t change that it is the best storyline since Crisis on Infinite Earths (which, before this reboot was the last time DC completely overhauled its characters). 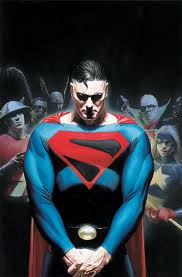 I’m feeling sentimental this week.  Deal with it.

Kingdom Come.  Just saying the title launches me into memories rich with my early days of comic-booking.  When Kingdom Come was originally released in 1996 it blew audiences away.  Mark Waid, celebrated writer of titles too numerous to list, anchored this tale.  I can think of no better partner for Alex Ross to have brought in to tell the story his heart wanted to draw.  Anyone familiar with Ross’ work understands the level of detail and quality that goes into every panel.

To give an example: you can pick up almost any comic on the stands today and there will be at least, AT LEAST, two throw-away panels in every issue.  I say that with a smirk because most books have many more than this, but I’m being conservative to avoid ultra-nerd blowback.  Alex Ross, seemingly, lacks the understanding of a throw-away panel.  Each panel is a component of the story, it is an opportunity for him to further tell something about the characters or the overall scene or even the entire story, in a single panel. 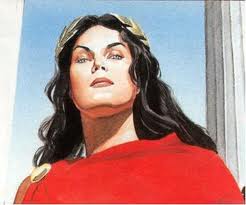 I feel confident spending the first four-plus paragraphs of this article gushing over this story and its creators because I have little doubt that ninety-eight percent of the audience that would read this article has already read Kingdom Come…it’s just that kind of epic story that people read.  Whether you’re just getting into comics or have been in the game for decades, Kingdom Come stands out as a must read.  But, for that small percentage of people who haven’t read it I’m going to talk some about what the story actually is.

At its most basic Kingdom Come is a story about a world without heroes, or at least, without heroes that anyone looks up to.  As the next generation of “metahumans” emerges the old guard have moved out of the spotlight.  Some have gone quietly into the night, like Superman.  Other’s have remained vigilant in their own way, like Batman and Flash. 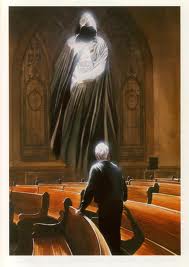 In a twist of story-telling not often used, Waid presents the story from the vantage point of an ordinary man, Norman McCay, who is approached by The Spectre to act as his anchor in this reality.  The Spectre is, for lack of a better term, the angel of justice.  He has been sent by “god” to judge those responsible for committing acts of evil and punish them accordingly.  But in this instance he is more of a bystander, along with McCay, to the horrid events transpiring in the world.

The story of Kingdom Come is so intricate that to even try and explain it without at least fifteen pie-charts and a physics degree would be a disservice to each of you.  But I will say this much: Kingdom Come brings the characters known as the staple of the DCU (Superman, Batman, Wonder Woman) into a new light and a perspective that few other writers would have had the guts to take and none could have done as well. 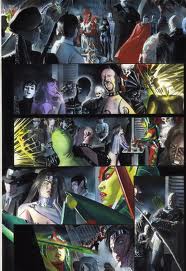 On a closing note, the images I have included here are to demonstrate several things; one being the hyper-detail in which Ross depicts even the most commonplace scene and another being the different, and aged look, of the heroes in this magnificent story.

Waid and Ross teamed up again recently on the maxi-series Justice which is also a must-read for any fan of the Kingdom Come universe.

Check back next FRIDAY as Bin Fodder moves to a new day and I review a new story!

p.s. Check out this review from last year of Kingdom Come by my fellow 8daysageek writer, Brandon Williams 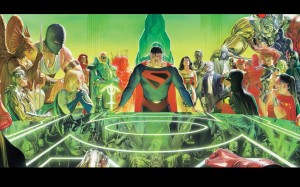