Google+ : The Plus Means Better

I’ve had my Google+ account for about a day now and I thought I would share my impressions with you.

First of all, I have to say thank you to my friend Tyler for sending me an invite to Google+.  I’ve used G+ on my Android phone and on the web via the mobile web app and the desktop web app.  While all of the routes of access let you use your G+ account very well the full desktop version is where I’ll focus.

Google+ is Google’s version of a few different services all rolled into one easy to use interface.  The easiest way to describe Google+ is a mesh of iCloud, Facebook, GroupMe, and TinyChat.  Let’s look at some features.

Circles – This is the big feature everyone is talking about.  When you add your friends into G+ you are asked to sort them by circles (friends, work buddies, pro contacts, etc.) Using circles you can share your content with a certain group of friends, a couple different groups of friends, or everyone.  Facebook does have groups but it’s nowhere near as clean or straight forward. 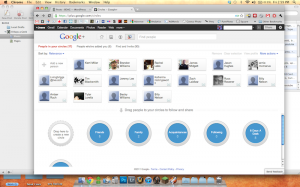 Sparks – These are basically RSS feeds that you can share with your circles.  Pretty straight forward and simple.  Google is making sharing everything the main feature in G+. 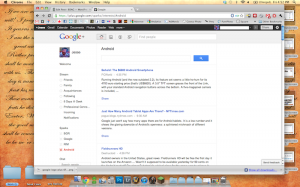 Huddle – This is the feature that I plan on using the most.  Huddle very closely resembles the social chat app GroupMe.  Using Huddle, you can add G+ users and normal cell phone users alike into a chat room and have a synchronized conversation with all of them at the same time.  GroupMe does this very well and I have used it quite a few times, but I’m very anxious to try Huddle the next time I need to use a service like that.

Hangout – Hangouts are group video chats for you and your circles.  Start a hangout and wait for your friends to come and hangout with you.  I have only had one hangout but that one worked very well.  You can also watch a youtube video together.  The best part about hangouts is that with a group of people online and in the hangout the person that is talking will be set as the focus and take up the largest screen.  The focus feature makes this very useful for video podcasts and other situations where interviews could happen.

Uploads from phone – If you get the Google+ app you can also set your phone to upload pictures and video automatically to G+ so that you can share them later. 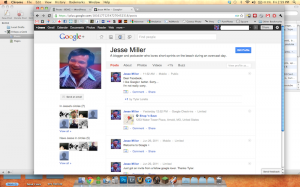 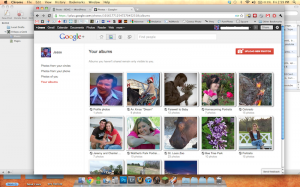 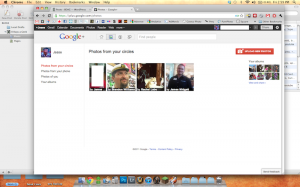 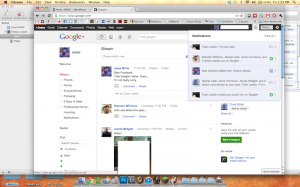 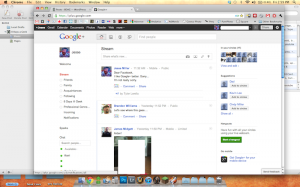 What does all of this mean?  Google seems as if it’s going after Facebook in a big way with all of these new social features.  I think that if they get the users that Facebook has then they could muscle their way in pretty well, but you have to remember that a social network is only as good as the number of friends you have on it.

A small time blogger with big time dreams and a love for everything geek.
View all posts by Jesse (The Pen of Doom) →
Tagged  beta, facebook, Google, groupme, icloud, invites, plus, social.
Bookmark the permalink.