Let me start by saying that out of all the Avengers lead ins I was most excited by Captain America. I have like Cap for a number of years and was unsure how well it would transition to film. What your about to read is a love letter to this movie, so be prepared. 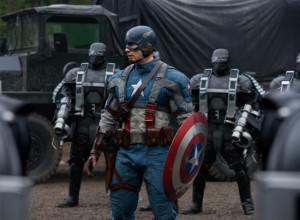 He tosses Nazis for a good quarter of the movie.

Joe Johnston Who I knew would do well from his films The Rocketeer and Hidalgo, but I had some small doubt because of The Wolfman being his latest film, the direction was perfect and although I found a few flaws (Why were the German controls in English?) He brought justice to one of my favorite characters. 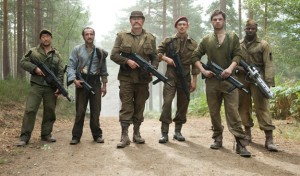 The cast, what can I say it was perfect. Let me break it down into the important stuff. Chris Evans has shown me before that he CAN act, after all I was one of the twelve people who saw Push. Evans brings a gravity to Steve Rogers Aww Shucks attitude and I believe it, I actually believed Evans as the skinny Rogers to the point that sometimes I forgot it was done with superb CG. Hayley Atwell as the love interest Peggy Carter was great, beautiful, strong, and believable. Stanely Tucci just keeps going every which way he can when it comes to his career and his Dr.Erskine was one of the most finely crafted characters in the movie. The Howling Commandos (Although they are never called that) and Bucky were all good, not stealing the movie good, but I enjoyed the scenes they were involved in as much as the epic battle scenes staring Cap. Hugo Weaving was incredibly evil, a relieving change to the heavy handed villains we have been seeing. Hydra was evil, no “we want to better humanity” or “you stole my fathers tech” The Red Skull and Arnim Zola are pure evil and we don’t need an excuse for that. Now let’s get to the stand out performance, the one character that made every single scene he was in golden, Tommy Lee Jones. Is there a way we can add him as a ruffled military man in every movie? This guy gave R. Lee Ermey a run for his military money. 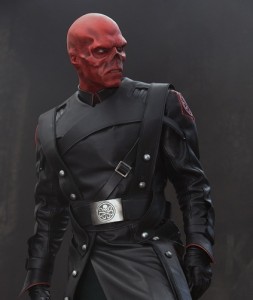 The Story was great, the origin story of Americas greatest soldier sandwiched between two small scenes set in the modern day. Sure there were some corny lines (I can do this all day, Open a tab, etc.) and cliched moments (Car stopping on the edge, jumping through the flames once on a motorcycle once not, etc), but it was there to pull in the …less intelligent crowd. The skinny Steve scenes were all so charged with emotion that you forget it was a face swap and you feel like Evans has really been through all this torment. When we finally meet Captain America the story takes a left turn, successfully answering one of my sceptical questions “how will everyone know him?”.  The USO shows and a very unsuccessful speech make for a perfect transition to the heavy action. Cap then performs an impossible goal and wins over the remaining skeptics and we are given another great montage showing us how far Cap has stuck his boot up Hydras ass. A tragic event occurs (SPOILERS! did anyone else notice he fell in Russia? Winter Soldier! END OF SPOILERS!) and Cap goes on his final mission, kill Red Skull. The ending gave me chills, you HAVE to stay until the credits are done as well, for an amazing first glimpse at The Avengers. 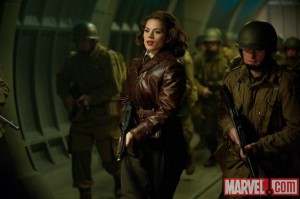 Sexy, smart, strong, shoots stuff. Those are the 4 Ss in a good woman.

Over all I was shocked, this was my favorite of the Avengers lead ins, hell, it was my favorite Marvel movie! Somehow beating out Spiderman 2 and X-Men 2, Second to only the Dark Knight and I view them as almost equals. I may have liked it more than most, but lets hear your views on this great film.

I'm one of the main contributors to 8 DAG and I take pride in my other job as Public/Staff relations. I'm a comics and movie junkie and I love to podcast. Follow me on Twitter @BrandoCop
View all posts by Brandon C. Williams →
Tagged  avengers, Captain America, marvel, review movie.
Bookmark the permalink.