Brian K. Vaughan is what I would call a pretty darn successful writer.  Not only has he written on some of the industry’s biggest titles, but he has successfully launched and written-to-completion two of the best books of the last decade.  I am speaking, of course of, Y: the Last Man and Ex Machina.

In my opinion both were angled towards adult/mature readers, but only Y: the Last Man was carried through the Vertigo line; Ex Machina was a Wildstorm book.  Vaughan shows through each of these titles that he knows how to write a story from a perspective focused on one character but not leaving the audience adrift in the perilous state that such stories usually do.  And in the case of Y: the Last Man that’s incredibly important.

But the writer hardly does it on his/her own.  In this case Vaughan worked with co-creator and artist Pia Guerra.  Her style is perfect for the “everywoman” story.  There are no superheroes, there are no giant gun-wielding crazy villains and there’s no spandex.  Guerra’s pencils, along with Jose Marzan, Jr’s inks and Pamela Rambo’s colors, make Y: the Last Man a visually striking book.

In this first review I will be covering the first and second collected editions of the series, spanning issues 1-10.

As the title of the book implies the story’s main character, Yorick Brown, is the last human man on earth.  How did this happen?  Why is he the only one?  These are all questions that will be answered in time.  For now I will simply say this: all is not as it seems. 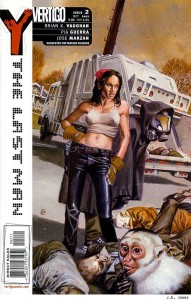 The first issue puts you right into the thick of things with the events happening “now” and then immediately jumps back in time.  This is a common theme Vaughan uses throughout the book.  This issue shows the events leading up to the loss of every man on earth (I will say this a lot and it will always be implied to exclude Yorick).  It does a good job of introducing you to the three main characters and several of the ancillary characters that will play a part throughout the series.

As the issues progress into the body of the first arc we see how petulant Brown truly is.  His only thought is ever of his girlfriend Beth.  At the beginning of the story she’s on a trip to the outback in Australia and the two of them were speaking when “the event” happened.  Which, unfortunately for Yorick, corresponded with him having just asked Beth to marry him…via phone…long distance.

His singlemindedness of course causes significant problems for Yorick’s two companions: Agent 355 and Doctor Mann.  On several occasions Yorick announces his presence to groups of people, which is clearly not something the last man on earth should be doing. 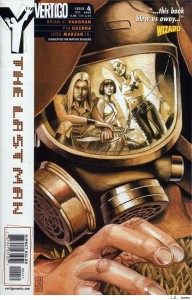 There are several underlying stories that run throughout these first two collected editions.  First, the Amazons, which are a group (and by group I mean cult) of women who believe that the destruction of man was an act of vengeance by god/mother earth/insert-deity-here. The Amazons are known by the fact that as a sign of loyalty to the group they have their left breast surgically removed.  The kicker is, a member of Brown’s own family has fallen into sway by these people.  The second thread is of the Israelis.  A secret person of power and influence within the United States begins feeding the Israelis information as to the existence and whereabouts of Brown and a group of them come to America to capture him.

As an opening act, Y: the Last Man has an intriguing albeit not entirely original idea behind it.  It sucks you in right from the first panel and keeps you interested.  Just when you’re tired of hearing Yorick prattle on about the love of his life, they characters get into a fight with some hobo train-car bulls and end up getting tossed off the train in Ohio where a new adventure ensues.

Keep your eyes peeled to 8daysageek.com for the continuing review of Y: the Last Man!

Playlist: Harry Potter and the Prisoner of Azkaban. (Yeup…full-on nerd in the house!)