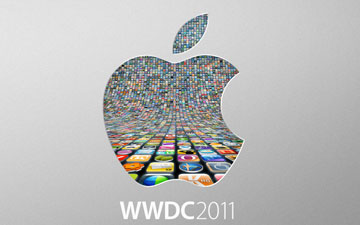 So Steve Jobs shared a few of Apple’s new goodies today and there were quite a few of them.  I’ll highlight the big ones below.

First on our list is OSX Lion, the newest update to the Mac operating system.  Lion will be available in July and will only be on the Mac App Store and will cost $30 (up to 5 devices).  I like the Mac App Store and how easy it is to use, but I would like to have an OSX Lion Disc just in case the worst happens.

Some of Lion’s new features include:

– Fullscreen mode – All apps wil now be able to take up the entire screen of your machine and knock the menu out of the way.  No more window cluttered workspace.

– Mission Control – A pumped up  version of Expose’, Mission Control lets you see all of your open apps, widgets, and desktop spaces.  You can drag windows where you want and put them into easy to organize stacks.

– Launchpad – This feature basically makes your apps and folders look like those on an iOS device.  Simple, but great.

– Versions – This feature allows you to save a file you are working on at any point and go back to that point later.  Simple, but useful

– AirDrop – This feature allows you to share files over wifi with a simple drag and drop interface.

– Mail – An updated mail app that kind of looks like the iOS mail app is also in tow.

iOS 5 will bring many new features to the iOS platform.

– Notifications – Apple took a note from Google and made their notifications a little less annoying.  With an Android-esque drop down menu, the next version of iOS gets a little more polish.

– Newsstand – This is basically an iBooks store for magazines and periodicals.

– Twitter integration – Twitter will be integrated directly into the OS to allow you to enter your credentials once and al other apps will pull them from the OS.

– Camera and Photo apps – A new camera app is included in the update and it brings a very sought after feature to iOS; taking a picture by pressing the volume up button.  Also, the new photo app allows you to edit photos directly on your device.  A lot of photo editor devs are crying a little inside right now.

– Wifi Sync – FINALLY!  Now your iTunes will sync to your device over Wifi.

– PC Free Startup – When you get an iOS device you normally need to hook it up to a PC and update it.  Now iOS will startup with a welcome screen and update over the air.

– iMessage – A new messaging app for iOS devices that allows you to have free conversations between iOS devices.

iCloud is the big buzz at this year’s WWDC.  A cloud based syncing service that will push sync your photos, music, documents, and backups to all of your other iCloud capable devices.  The best part…  It’s free.

– iTunes – Sync your music purchases to the cloud straight from iTunes. 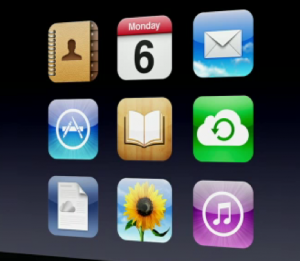 Great WWDC overall.  What features were you wanting that you didn’t get?

Want more WWDC goodness?  Check out some of the live blogs at Gizmodo, Engadget, and Thisismynext.