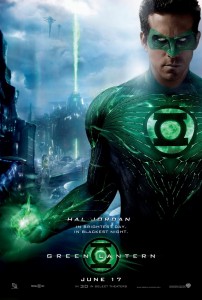 First of all what people need to know is that I love Green Lantern, He’s my favorite superhero. I had to really work hard on lowering my expectations of this movie. I was originally very uneasy about the casting of Ryan Reynolds as Hal Jordan. He won me over slowly with every clip I saw, and I have to say he was one of the strong points of the film.Reynolds brought the needed emotion and funny for a good comic book movie. 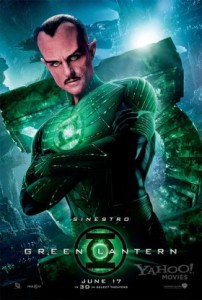 I wasn’t won over by the villain, going in I had said “I’m afraid I’m going to become bored of the bad guys” unfortunately I was right. Hector Hammond works in the story line, also I’ve always been big on making the backgrounds of these characters less confusing, crossing Hector Hammond, Parallax, and the Sinestro corps into one linear story works. Sadly, Hammond is still just a screeching dude with a big ugly head and Parallax is a giant smoke cloud. Sinestro was a dick though, which made for an epic after credits scene and a perfect set up for sequels. 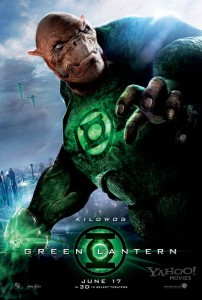 The Corps was neat, we met two members and saw hundreds of others. Kilowag is one of my favorite Lanterns and he was pretty sweet, a mean and gritty trainer voiced by Michael Clarke Duncan. Tomar Re is another friend of Hals, a fish like humanoid who is the first to meet Hal and give us a history of the Corps. If a sequel were to happen, I hope to see the other lanterns more. We also meet Carol Ferris who will become an important character later on and Amanda Waller, someone who could be the “Nick Fury” of the DC movies and unite the movies in one universe. 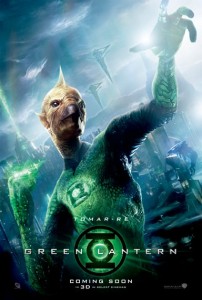 The action was top notch the story was decent. The good was there, the acting was good and it was a lot of fun. Reynolds did well, as did Mark Strong who played Sinestro. The bad was there too, Hector Hammond was portrayed as a real creep and it worked, but the screeching every time he was touched really irritating. Parallax was neat, but he looked a bit like a turd monster. Was it good? Yes. Was it perfect? No. The movie is worth seeing, just don’t expect a perfect movie.

What do you think Jesse?

First of all let me preface my review by saying I walked into this film know ABSOLUTELY nothing about the Green Lantern that Brandon hadn’t told me in order to ready me for this movie. That being said I believe that the “I’m playing serious but you know I’m kidding until the crap hits the fan” Ryan Reynolds was a great pick for the role of Hal Jordan, bringing levity to the situations that needed it and action where it was appropriate. The choice of Mark Strong was a great casting as well if not for the acting that he can bring to the movie then just for the fact that when I looked at the comics I can’t help but think he is the closest resemblance to Sinestro. I am, however, with Brandon when he says that the villains did get a little old after awhile, but I attribute that to this being a story starter. The first installment of a story tends to tell a load of details about the main character and next to nothing about his or her first villains. After seeing this movie I do have to say that I regret not following the Green Lantern story sooner and I’m sure there will be a number of people who feel the same way.

So what does this movie bring to people who have no idea who the green lantern is? Action that keeps you entertained, a leading man who can make you laugh and still man up when the action hits, and a story that will teach you a good portion of the beginning of Hal Jordan as a Green Lantern. Overall, I feel I definitely got my money’s worth after seeing this movie and would suggest you do the same.