Hello!  Welcome to this week’s edition of Bin Fodder.  Today I review the BOOM! Studios mini-series, X Isle.  The series was created and co-written by Eureka! television series creator Andrew Cosby.  The other co-writer is Michael A. Nelson who has done work on titles like 28 Days Later and Cthulu Tales.  Greg Scott does the art on the book.  He’s also done work on Fall of Cthulu and Galveston. 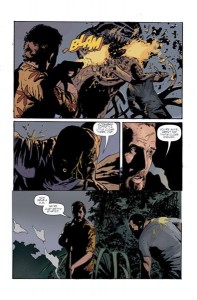 X Isle has a really outstanding premise: alien ship crashes on Earth creating an isolated island (think the island from LOST, meaning it can’t be found unless it wants to be), entire eco-system evolves around it, humans get stranded on island, harrowing adventure ensues.

The main cast includes: a botanist professor and his daughter, a student assistant, several other scientists, the ship’s captain and first mate.  Trust me, though, this is no S.S. Minow and they definitely don’t wash up on Gilligan’s Island (though there are a couple of poignant jokes to the classic television show). 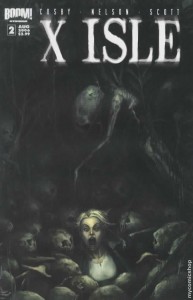 I was really excited when I first heard about this comic from a couple of my comic-shop buddies.  After reading the first issue I was a little iffy, but I wanted to give Cosby the benefit of the doubt, even if he fell prey to the classic writer dilemma.  He created characters with the express interest of putting them in dangerous positions where many of them are going to die and he wants you to care that they die.  But he only spends six pages on the character development before throwing them to the winds of danger.

It’s pretty clear, when you read the entire five-issue mini-series straight through, that the original story was not meant to be cut into issues.  Rather, it was written as a graphic novel, because the issue-ending cliffhangers seem forced.  No more is this apparent than at the end of the third issue.  The captain, Greer, and first mate, Benga, along with one of the scientists, stumble upon a dinosaur/monster and Benga gets its attention in order to herd the monster towards Greer so he can kill it.  Then they jump to the cliffhanger conclusion of the issue where the characters are standing together looking at previously-sunken ships and the monster is nowhere to be found. 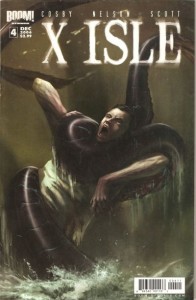 To compound the confusion of the end of the third issue, the fourth opens with the men calmly talking.  Four pages in the dinosaur re-appears and they have to fight it.  As a writer I want to blame the editor for this mistake, but it very well could have been the writer.  Either way, it’s a confusing segment that creates an annoying distraction.

The art is decent.  At times Scott falls in love with the use of shadows on the page, adding them very unnecessarily in attempt to add drama to the scene.  Additionally, because of the nature of the story being very action intensive and other-worldly, Scott tries to make his art appear more gritty, but falls flat on that front due to his style being most accurately compared to water colors.

X Isle is a book that had a ton of potential and the story of alien ship having crashed on Earth.  How that action generates interesting and intense reactions in the surrounding area is a truly great idea but this story leaves a lot to be desired.  As I wrote last week in my review of Lazarus Jack, Ricketts does a wonderful job of letting the reader see that the universe of the story is much larger than the scope of the story and you want to read more about it.  It doesn’t act as a distraction from the story itself and it doesn’t make the book you’re reading less interesting because of it.  X Isle shows you a wider universe of possibilities for the story and leaves you wanting that story rather than the one you got. 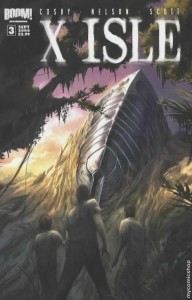 This probably reads like a really negative review, and I guess in a lot of ways it is, but I’m just trying to be honest in my appraisal of this book.  X Isle had so much potential but sadly it fell short of that achievement.  Thus, X Isle gets a rating of