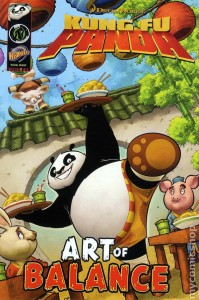 Hello!  Welcome to this week’s edition of Bin Fodder.  Today I will be reviewing Ape Entertainment’s Kizoic line release of Kung Fu Panda – Art of Balance.  The critically acclaimed Kung Fu Panda movie franchise has branched out into the world of comics in anticipation of the release of the second theatrical installment.  Art of Balance includes four stories, one main and three back-ups.  The main story is written by Matt Anderson with art by Dan Schoening.  The back-ups include work by Len Wallace & Christin Larsen, Jim Hankins & Dario Brizuela and Quinn Johnson & Chris Houghton. 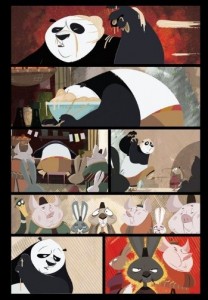 The main story in Art of Balance looks at Po’s new life as the Dragon Warrior and how he struggled with his responsibilities as son, employee and protector of the valley.  Master Shifu, ever the watchword, steps in to try and teach Po how to balance his dual roles as Dragon Warrior and son. 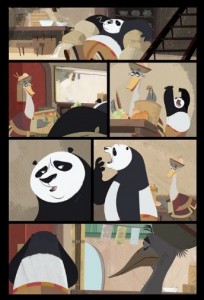 The back-up stories start with the tale of Master Ox, told by Po.  The yarn shows the epic battle fought between Master Ox and an invading army of rodents.  What was is that Master Ox was defending?  A city?  An orphanage?  You’ll have to read it to find out!

The second back-up takes a look at what would happen if Po, left to his own devices, must run the noodle shop for a day.  Mr. Ping is sick and Po, with the help of the Five, must run the shop during the most dangerous time of day…lunch!

The third and final back-up is a fun story with a twist ending.  In a meaningful use of no-dialogue the story plays out in all action sequences involving all members of the Furious Five and Po the Dragon Warrior.

Art of Balance is a great ramp-up to the release of the second Kung Fu Panda movie as well as the ongoing comic series, both coming later this Summer.  Based on the quality of the main story and the fun nature of the back-ups I give it (insert 3 ½ stars).

p.s. As of next week I will be moving Bin Fodder to New Comic Wednesday!  So keep an eye out for the change!