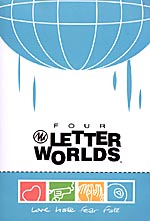 wholly different than any I’ve previously reviewed.  Worlds is a collection of sixteen all original short stories sectioned off in four categories: love, hate, fear and fate.

A lot of collections tend to fall flat due a lack of talent, which is not the case with this book.  It includes work from Robert Kirkman, Matt Fraction, Chynna Clungston, Mark Ricketts and Joe Casey.  So you’re asking yourself, “Why haven’t I heard of it?” and that’s a valid question.  To me it’s a question of timing.  The book came out during a period of transition for Image and got somewhat lost in the shuffle.  But that’s why the interweb gave people like me an opportunity to bring it to the masses.

Worlds opens with four stories on the topic of love…something all us geeks think of fondly but have less-than adequate experience with.  Right on cue the first story is a wordless eight page tale of young love and loss mixed with remembrance of times gone by.  This gentle tale leads right into a psychedelic story involving nude women, drugs and pimps and in the end it turns out to be a virtual world experience.  Turn the page and you’re inside the mind of twenty-something “loser” living a life of self-imposed misery due to the loss of a girl.  And the chapter ends on a tale of a man returning to his boyhood home with his family and his ability to talk to animals remains, despite his desire to have left it in his youth.

The second chapter of Worlds contains four stories themed in hate.  It leads off with an experience many of us apartment renters have dealt with, the noisy upstairs

roommate, but in the end it turns out the character is just insane and can hear the most miniscule sounds and it drives him batty.  The second part is about a hit woman who hates no one but herself and it’s due to the choices she’s made to end up where she is.  The third is more of a personal story dealing with the author’s memory of the first time he experienced racism against his mother and her reaction of subtle violence (she keyed the mean chick’s car).  The chapter ends on a note that seems to have no place, since the story is all about not hating. It’s about a guy on a date talking about his ex-wife and the divorce and she keeps bringing up that he must hate her and he explicitly says that he doesn’t…apparently there’s reverse psychology at work here.

Chapter three of Worlds focuses on fear.  It starts off with a well put-together, wordless story, much like how chapter one started off the book.  This one is set in a 1984 type world where the people’s spirits are being crushed by the benevolent societal hierarchy.  Abruptly switching styles the second story is one of loss and the implied fear of a life without meaning due being less-than whole without the love you’ve given away to another.  The third installment seems rather out of place, not really dealing with fear, not directly at least. Fear is brought into it, but it seems forced; not the best story of the bunch.  The last part of the chapter is a story whose art leaves something to be desired.  It’s a disjointed compilation of inky blackness and pure whiteness with occasionally discernable shapes mixed in.

The final chapter of Worlds is fate.  The first component is a Clungston story, true to form with her distinct style and character driven themes of love.  This short yet heartfelt

tale is about a man finding his one true love through the storm of life and asking her to marry him.  The second story is about a con-man who gets caught up in the web of lies he has spun for his entire life.  The lesson: liars only prosper when they don’t get caught.  Part three stars, literally, fate.  It’s been decided that Fate needs an upgrade from the P.R. department.  Two young go-getters are trying to convince Fate that his existence and role in the universe would go a lot smoother if his image was improved.  The final piece, by Matt Faction sending the story out in style is a dark and brooding look at how all of life’s little events can all be connected and that the life you lead is entirely of your own making, so don’t screw it up.

I feel almost compelled to harp on the fact that the strength of the writing and artistic talent in this collection is very impressive.  This kind of book is the reason I started writing this column in the first place, not because it’s the greatest thing I’ve ever read, no.  It’s because the stories are solid, the art is wonderful and it’s not well known.  The overall quality of the collection is there.  I judge it purely on its own merits, not grading it against others and on that note I give it a solid