Deep End Of the Pullbox : The Uniques 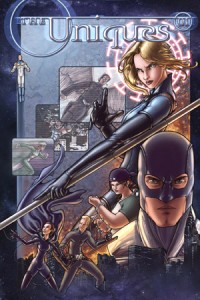 The Uniques, written and drawn by Comfort Love and Adam Withers, lives up to it name as it is the most amazing comic I have found so far. Together they have taken the most stereotypical characters (the speedster, the sidekick, the bad boy) and given them  the character depth that usually takes 20 issues and a Crisis to develop. Mind you, each full color issue is roughly 30+ pages so that helps.

The first trade contains the first three issues of the ongoing series and starts off in 1992. Here two of the worlds greatest heroes, a husband and wife team of telepaths/telekinetics, are at a UN gathering in thier honor.  Suddenly, a madman appears and self-destructs taking out them, New York and a large chunk of the worlds superheroes.

Have no fear! They are survived by their teenage daughter Hope ( cliche I know) also called Telepath. Alas due to some psychic backlash she was put in to a coma for two years. She wakes up fresh to the idea of her deceased parents and a world that had moved on. Having been around capes her whole life and been a teen cape herself, she decides that is the only thing she wants to do with her life and puts together a team. A team that isn’t like your usual teeny bopper, all together now, have-your-own-press- agent- team. One that just exists to do good. And what a team it is! 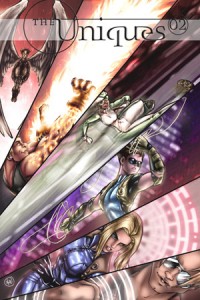 She is joined by Quake the handsome anarchist, his bud the rebellious Scorch, Kid Quick who is Hopes childhood best friend, Scout the sidekick trying to make it on his own, and  Michael the winged sharpshooter carrying on his grandfathers WW2 legacy. Acting as den mother/tech crew is the high-tech,  D&D playing, Motherboard.

They seem like your average cookie cutter capes but with Love/Withers writing they use new and creative ways to do powers. From the moment I saw Hope using her telekinetic powers on herself to make her more agile in a fist fight I knew this was going to be a great comic. 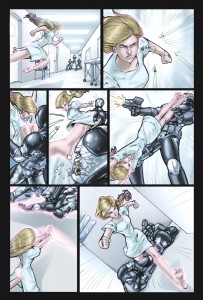 Definitly my favorite part in Vol. 1

These characters are what makes this comic so great. Follow them in the first volume as they train and try to be something better that they were as individuals. From their first training session to their first villain take down!  The art is wonderful, each character has a different body and face type that helps define their personality. Along with great conversations and original plot make this a seek and find guys. I, myself, after reading the first trade, went over to Adam and Comforts table  and immediately bought the second one.

Check them out for yourself at www.uniquescomic.com

I travel the US attending every convention I can! Refairs in Wichita to ComicCons in Chicago. The Anime Fests and one day College Campus Sci-Fi days. I sell nerd-flavored t-shirts and animal hats(think Molly from Runaways) along with random Steampunk. My posts will be about a few of these cons and how YOU as a geek should prepare for them!
View all posts by Katherine Hollingsworth →
Tagged  indy, The Uniques, underground.
Bookmark the permalink.