Top 8 Most Romantic Moments In Comics

With all the punching, posturing, and power posing in comics it’s easy to see that it’s a mans world, but among the greatest of men stand the greatest of women. She can be his anchor, inspiration, or beacon of light in his dark world, she exists to create a human feel for the otherwise superhuman heroes, with her existence comes some incredibly romantic moments.

In no order here are my top 8! Preacher by Garth Ennis and Steve Dillon is mainly known for graphic sex, murder,  fights, alcoholic vampires, Nazis, inbreeding, meat molestation, and of course religion. When I first read this series, all I saw was the epic romance between two characters, a love so powerful that God in heaven, the Devil in hell, nor anyone on Earth in between could stop it. Who would want to? This issue stands out among all Jesse’s and Tulips moments because this is the moment where the two are reunited after a long and terrible separation. With Tulip believing her one true love is dead, she indulges in sex and drugs with whatever and whoever is handy. She hits rock bottom so hard it jolts her out of her depression so she cleans herself up and tries to move on. As if rewarded by fate, Jesse is finally reunited with her and the two join together in passion on her best friends apartment floor.

Jesse always says, he will love her “Till the End Of The World.” With moments like this, you know it is true. The single greatest wedding issue I have ever read in comics.

Jean and Scott have had their moments, from young lovers to college sweethearts, they have stood and fought side by side. Through her almost deaths and his control freak leader days, they finaly tie the knot in this special issue. So many great scenes fill this comic with the warmth of a wedding and the memories that come with it. Storm keeping the weather nice, Scott and his borther Alex bonding over bow ties, Jean telekeneticly dancing with Professor X, and Gambit stealing the garter while Rouge takes the boquete. Such typical small things make this a giant sized romantic moment that makes the reader the feel that it is all worth it. Friends and family by their side, Cyclops and Marvel Girl share love, laughter and cake (most of it smushed in Scotts face). 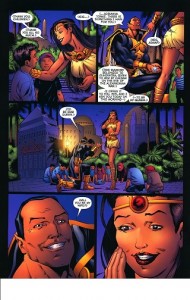 Black Adam isn’t exactly what we’d call romantic, Known for tearing people in half, this anti-hero struggles to protect his country with a no fly zone on other heroes and a stern lightning fist. This changes when he meets the wise and spunky Adrianna, a slave brought to him as a “gift” and after killing the slavers he sets her free, but oddly enough the two bond over the need to improve their country. After sharing his power with her, the two become a force of good to be reckoned with. He decides there is no one else more suited to be his queen and wife, offering her a diamond the size of a fist doesn’t hurt either.  Her love for him changed a country and turned a whirling dervish of anger and hate into a benevolent ruler.

5. Bigby Wolf Proposes to Snow White in #50 of Fables It took fifty issues for these two lovers to get past their own issues and finally get together. The Big Bad Wolf’s love for the icy deputy mayor and former princess never burned hotter then when he returned home to claim her as his wife. After having seven kids, but being unable to be together, Bigby returned a hero of Fabletown and ready to give Snow the life she needed. He says to his love “I’m certainly no handsome price, come to steal you away from all the cares in the world. I can never offer you riches and palaces or any sort of luxury . . . What I can offer you is a home in our valley where we can raise our kids. And I’m old-fashioned enough that I think we should be married to do it.”

They are married that same issue! 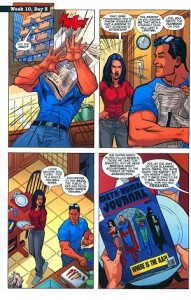 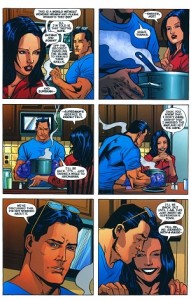 Two simple pages, 10 panels define a marriage that has spanned 70 years in TV shows, big screen movies, comics, and within the hearts of fans world wide. During 52 Superman is powerless and is living a civilian life as Clark Kent, husband and journalist. As Lois tosses a paper in his face and yells at him about jumping out a window to get a new nameless heroes attention(irony), we see the playfulness of their relationship. They joke and flirt as he makes dinner (she has to remind him to use oven mitts)while they discuss when he may get his powers back. She tells him that she married the man, not the cape, this is endearing and true as we all knew she was engaged to Clark before ever knowing he was Superman.

Out of all the beautiful moments of Superman carrying Lois through the air, cape blowing in the wind, I chose this one. Why?  Because any woman can relate to the simple joy of a night home with the man she loves. Sometimes a gal doesn’t need a Superman. She just needs a Clark. A love story that spans thousands of years, hundreds of miles, and even into the deep reaches of space. One of my favorite couples return to DC after Blackest Night ripped them apart. The lovers face the gift of eternal love through reincarnation and the curse of being killed over and over again by the evil they can never end. Sometimes they remember flashes of their past lives, sometimes only one or the other, sometimes neither remember anything. In  this moment, on a fur skin rug, surrounded by weapons of their past, both lovebirds recall the love they have shared in the past and hope it will last forever. Always fearful of the day they will be killed and lose each other again, Hawkman starts to pull away, but Hawkgirl isn’t having any of that and pulls him back. Wisely reminding him, and all of us reading, that fear of losing someone you love should never keep you from loving them now. 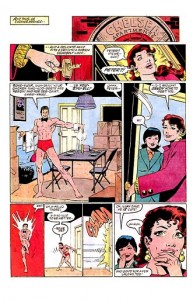 Sometimes it’s hard to be a woman. Giving yourself to just one (Spider) man. In this fun page you see why Mary-Jane thinks its all worth it. After living out of boxes in Peter’s cramped apartment, he decides to do something special to perk her up. Setting up a modest candle lit dinner he dresses up in a bow tie, underwear, and a smile (and little else) to greet his bride. She does indeed greet him back, along with a girl friend from work she brought to meet him. Turning redder than his spider suit he runs into the next room to change. This is the moment that makes fan girls everywhere say “Awww, what a sweet dork!” When you lose someone you love it hurts, It always hurts and nothing can take away the sting. Sometimes, if you are lucky, that person may come back in to your world and then its up to you both to make sure you don’t lose them again. In an extremely touching scene Guy Gardner, the frat boy of the Green Lantern Corps, swoops in and plants one on Ice, his formerly deceased love. No tearful greetings, no awkward talk about how or why she’s back,  just BAM! One great kiss says it all and we know how he feels about her. The next few pages are filled with Ice talking about how coming back from the dead is unsettling and she needs space for now. Guy gives her this wish after promising he’ll always be there when she is ready. For a knuckle dragging redhead, he sure can love. Any Man can give you roses or chocolates, but few will hold your hair back when your hurling up pure evil that stems from your demon father. After tapping into her dark side to defeat her evil brothers, Raven becomes incredibly ill and must vomit the impurity out. Who stays by her side and holds her hair and hand while she’s at her most unattractive? Beast Boy, the man she turned away and previously said she had no REAL feelings for her. She sits corrected as he wipes her mouth and he rubs her back. Romance is not dead, but maybe just different from our parents day. After all, love isn’t always pretty.

I travel the US attending every convention I can! Refairs in Wichita to ComicCons in Chicago. The Anime Fests and one day College Campus Sci-Fi days. I sell nerd-flavored t-shirts and animal hats(think Molly from Runaways) along with random Steampunk. My posts will be about a few of these cons and how YOU as a geek should prepare for them!
View all posts by Katherine Hollingsworth →
Tagged  comics, List, love, valentines day.
Bookmark the permalink.