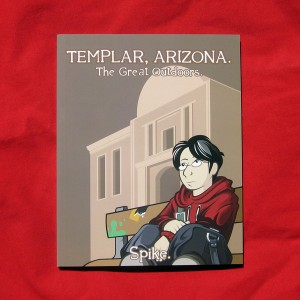 Written and drawn by the fabulous SPIKE, we enter the city of Templar with Ben, a young aspiring writter, as our guide. Ben is living on his own for the first time and has gone out little since arriving in Templar a few months ago. That is all about to change as his full-figured, upstairs neighbor, Reagan, drags him out onto the streets and into an amazing world of city and sub-city culture. As you know every area has their own group and sub-cultures but you have never seen anything like Templar. SPIKE has created a down the rabbit hole feel without being unrealistic. Given us people like wickerheads (who all wear wicker masks), sincerist (a group that demand honesty and sincerity in all they do) and  Xenophage (a resturant that severs morally indefensable food) as a living backround.

I love every character in this comic and that is not something that happens often for me. From Reagan’s loud attitude and her daughter, Zora,  inquisitiveness, to Scipio the large african-american man who wears a kilt and has a pet chicken. That image alone is worth you sneeking a peek at this book. Like Ben you feel after awhile, that you are pulled along by these zany supporting charaters. The plot of the story, which has yet to show itself, does not drive the story. The people do.

Along with such deverse characters, are wonderous, well drawn, although ficticious city attractions that give a surreal feel of Templar. Many people when forming a fake city for thier comics base it clearly off of another real city. Gotham is chicago in the 30s, Metropolis is New York in the 40s, Fawcett City is the Manhattan of the 50s. The closest I can describe Templar is: 70s San Francisco with 80s Chicago and early 90s Queens. Maybe. The fact that I cannot describe it only adds to the world SPIKE has created.

Ben gets a full tour by Reagan as she shows him the city he lives in. I recommend joining them in the first volume on sale now.

Read it for free at www.templaraz.com But support the artist if you like it  ; P

I travel the US attending every convention I can! Refairs in Wichita to ComicCons in Chicago. The Anime Fests and one day College Campus Sci-Fi days. I sell nerd-flavored t-shirts and animal hats(think Molly from Runaways) along with random Steampunk. My posts will be about a few of these cons and how YOU as a geek should prepare for them!
View all posts by Katherine Hollingsworth →
Tagged  deep end of the pullbox, indy comic review, templar arizona.
Bookmark the permalink.