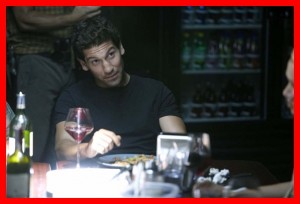 An interesting flashback to how Rick wasn’t killed during his coma put some insight into how we view Shane.

A montage of shower scenes shows us the joy that something as simple as a shower can provide. A drunken Rick tells Jenner exactly what he needs to hear, a simple scene that holds a lot of weight. It’s funny, at the beginning of the episode we were given a positive view of Shane, but then he goes on a drunken binge and tries to rape Lori, way to go dick!

A science lesson about the brain and a walk through of the process to becoming a walker is shown giving us some history to the disease. A shocking revelation about whats going to happen, the basement generator will run out of fuel, and the decontamination process will occur, if it’s anything like the lab decontamination then it will be a fiery death to all inside. The survivors decide to go to the basement to investigate and they find nothing, which is worse than finding something. As the building began to shut itself down, Jenner gave us an eerie speech about how the end will come to them all, stuff like this is why this show is so good.

Good job Shane go into another rage, that guy is a dick. Our survivors try to think of a way out of certain death in this building, and into almost certain death outside. The hard decicion is made by Jacqui and Jenner, while Andrea and Dale cut it close, The CDC explodes in a huge Michael Bay style.

So the season ends, but it will return and if season 2 is half as good as season 1 we’ll have a hit.