Geekly Forecast: The Other Guys and Middle Men

The premise for The Other Guys is as followed: New York City cop Allen Gamble (Will Ferrell) is a forensic accountant who loves paperwork and hates fieldwork. Detective Terry Hoitz (Mark Wahlberg)is a tough cop who has been stuck working with Gamble ever since a mistaken shooting. They constantly try to impress top cops Highsmith (Samuel L. Jackson) and Danson (Dwayne Johnson). Gamble and Hoitz get a chance to redeem themselves and hilarity ensues. Directed by Adam McKay, who brought us some of the best comedies ever. 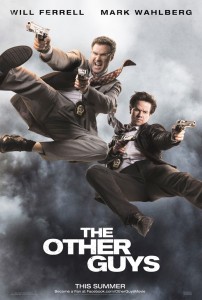 What I worry about is this movie being forgotten about like Cop Out, a similar buddy cop comedy. This one has Michael Keaton as the Cheif though, so maybe I’ll enjoy the side characters as much as I enjoy Ferrell and Wahlberg. This movie should do fine, beating out Salt and Despicable Me, but losing to Dinner for Schmucks and, of course, Inception.

The trailer does a good job at setting up the characters and poster is original and funny, with it’s spoof on the flying gun shot view we see way too often.

So, what’s Middle Men all about? Let’s ask Wiki. 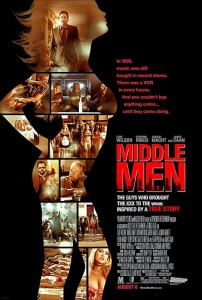