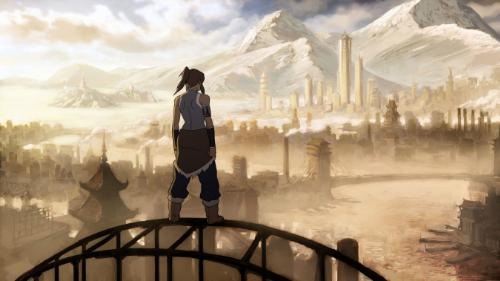 Did you like Avatar: The Last Airbender? Well, there’s going to be a new Avatar in town, and her name is Korra. Series creators Michael DiMartino and Bryan Konietzko  are working on a new series, The Legend of Korra (working title), that will premiere on Nick in 2011.

“Mike and Bryan have imagined a compelling new story inspired by the Airbender mythology that they so brilliantly crafted when the TV series began. This new avatar is not only a girl, but also hot-headed, independent and ready to take on the world.” – Brown Johnson, President, Animation, Nickelodeon and MTVN Kids and Family Group.

The Legend of Korra takes place 70 years after the events of The Last Airbender. Korra is the next  avatar in the cycle, a waterbender, and is described as a passionate, rebellious and fearless teenage girl from the Southern Water Tribe. (There seems to be a lot of those in the Southern Water tribes).

In the beginning of the series she has already mastered three of the four elements. Korra has to find a teacher for the final element, air, which leads to her Tenzin, Aang’s son. She ends up in Republic City, the most modern place in the Avatar world run by steampunk technology where benders and non-benders live. Korra finds that the city has a growing anti-bending revolution and has an ever-growing crime rate.

The series will follow her as she learns to master airbending and deals with the crime and situations around her in Republic City.

Here’s a question for those that have watched the original series, or know a few things about it. Seeing as this series is based 70 years after the original, what do you think has happened to the original cast?