I Love MegaMan, I can admit that his games are repetitive and that they lack any real story, but hey if Fast and Furious movie can still make money then whats wrong with loving an icon? I have compiled a list of what I view as the coolest and lamest of MegaMans Villains, I didn’t include Megaman x or Megaman battle network villains because let’s face it, I can only choose 5 lame villains.
Lamest Megaman villains 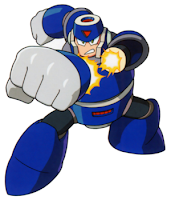 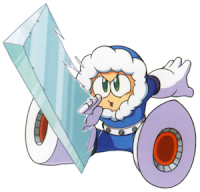 Not the cool X-man or even as cool as a dead frozen cave man, Iceman was an ice climber on crack. Absolutely not intimidating and even less smart you defeated this moron by letting him slide into the wall while you shoot him in the ass. You don’t even get a decent weapon, you get a snowflake launcher, I wish you could just pass him up, but no you have to defeat him. even in the cartoon he was a joke who was never taking seriously.

3.Heatman
I was torn by this, You get a useful weapon from this chud, His level was challenging and fun, and he has the upgraded abilities of the awesome Fireman, yet I 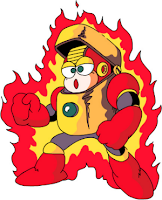 can’t get past his horrible design. I looked at about a hundred of these robots and tried to find the best and worst while not letting my personal feelings really get in the way, and with Heatman I decided to forget trying to please the masses and just decided he had to be ridiculed. Okay so his power, weapon, and level are pretty cool but that does not excuse the fact that he’s a giant Zippo lighter.

Get ready for some horrible jokes people, Airman is absolutely lame. So I’m 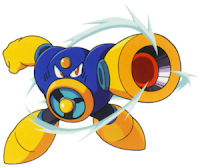 looking for some robots to turn into terrorist with fearful powers and a presence that would make a grown man wet his pants, and what on this planet is more terrifying than AIR! Airman, which is a horrible name any way , sucks (I warned you) His level is so hard you want to punch the screen, and when you finally reach him he’s pretty difficult. All the hard work you put into Airmans torture level from hell better have a rewarding weapon , sorry his weapon blows (there I go again) fantastic news though he can be defeated easier using wood mans weapon, because even though he can blow a man made of metal away from him he can’t chop up a couple of leaves that clog his propellers. In Japan There is a song written about Airman and how hard he is to defeat and the huge disappointment you feel after getting his weapon. 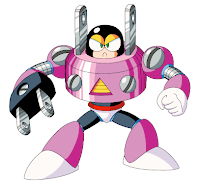 I don’t think that words can properly describe how incredibly crappy this character is. His original purpose was to test T.V’s in a warehouse, even his job is lame. He has a lazy design and I guess the designers were in on the joke because he’s pink to top it all off. I can’t even type anymore about this steaming pile of fail. so just look at this pic and think about he’s the only villain who could be taken down by an infant with a hand full of dimes.

I'm one of the main contributors to 8 DAG and I take pride in my other job as Public/Staff relations. I'm a comics and movie junkie and I love to podcast. Follow me on Twitter @BrandoCop
View all posts by Brandon C. Williams →
Tagged  video games.
Bookmark the permalink.