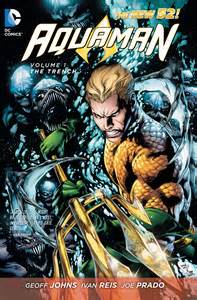 Last week at the Book Club I attend we discussed the first Volume of the New 52’s Aquaman. It compiles the first 5 issues of Aquaman from the New 52, which of course was DC comics big relaunch 2-years back where they began the universe again from scratch. Retcon, more or less, which we have seen a plenty in the DCU (Crisis on Infinite Earths, Identity Crisis, Final Crisis, The Passion of the Crisis, and every other Crisis you can come up with #DCCrisisNames).

During that time Geoff Johns, with Ivan Reis and Joe Prado, took the reigns on Aquaman and gave it a good shove into a new approach starring the King of the Atlanteans. As a group we agreed they did a fair job.

We all sat down at Boomerang Comics in Lewisville, TX and went around the table to discuss the first volume in this revamped series. It primarily deals with lightly intoducing the character, less backstory and more this-is-who-he-is. 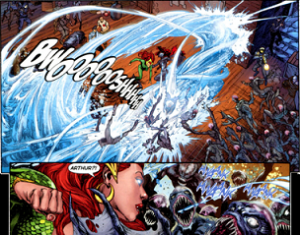 During the evening I found, while everyone seemed to enjoy the book, there wasn’t an overwhelming sense of enthusiasm. Yes, It was a good approach. Yes, the art was fantastic. And yes, There is more to the character than just breathing underwater and “talking to fish…” (he doesn’t talk to fish he mentally compells them to perform the actions he needs. Fish aren’t intelligent enough to talk. Dolphins? That’s a different story).

There was nothing really wrong with the book, the villain was kind of weak, but if you have been following the story beyond volume 1 you know they come into play as part of the bigger story coming up.

The real problem with it is the same as it has always been. To make an under-the-sea-character interesting you really have to get them out of the water or make what’s happening beneath the surface something we can relate to. Everyone liked this Aquaman. The pastel like haze they used to flashback to young Arthur Curry and his father in the diner was touching and it’s nice to see him made so real. John’s drew immediate attention to all of the jokes everyone makes about Aquaman and made them for us, and shut them down right in the first issue: He’s not wearing an “A” for Aquaman, it’s an Atlantean symbol, etc. 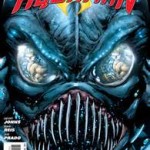 The best part of this volume was the way they made Aquaman relateable. It addressed that he is still powerful without water and his strength and powers are on the top shelf. It showed us all of this with brilliantly layed out panels and subtle suggestions from the characters. It humanized him with the touching flashbacks.

What it didn’t have was Black Manta or explain why he is such a dick, why we should even look to the realm beneath the waves and care about it. While soft praise was being layed onto this story I had to play devil’s advocate a bit to point out that The Trench weren’t a worthy adversary. 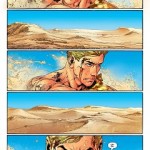 That is what this volume lacks. It’s not that we all have such short attention spans that we need to see Darksied in a scuba suit terrorizing the helpless Atlenteans with explosions set off by trained sharks. It’s that a swarm of what more or less appear to be really dangerous minions just don’t do it for most people. If you want a swarming enemy to seem like a viable threat you need to approach it all zombie style. Make your characters kind of helpless and hiding. Make survival and the things we do to survive part of the story. The Trench later become part of a bigger story where we learn how Atlantis sank and the parts that broke away each evolved in their own way. It does become interesting.

Just… not wholy interesting in this volume. At the end of the night Niel (the store owner) asks, “… is anyone going to continue reading the story after tonight”. Crickets chirp. I even kept reading the single issues originally until about issue #20. But volume #1 just doesn’t capture you if a solid hero story is what you are looking for. It’s good at some things, but you need more to bring Aquaman out of the depths.

As always feel free to disagree below or on twitter @werewolforigin. Join us for the next book club. This month we are covering Six Gun Gorilla by Simon Spurrier. I have heard great things about it. Spurrier did Number Cruncher which you can see reviewed on our site. Book Club meets on the last Tuesday of every month and I usually write it the following day.