Tonight I saw what I’m guessing will be one of the best movies of the Summer, Guardians Of The Galaxy. It’s a space adventure about a bunch of “a-holes” who cause a bunch of chaos in a haphazard attempt at kind of doing good. Filled with a heavy handed cast (Bradley Cooper, Vin Diesel, Chris Pratt, Zoë Saldana, Karen Gillan) and Directed by James Gunn (Super, Movie 43) it was an excellent mix of fun, action, and real drama (oddly enough). 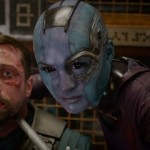 The story centers around Starlord (Chris Pratt) and how he goes from scavenging outlaw to galactic hero as he leads a motley crew or equally disturbed and complex characters. These characters include: Rocket, a talking raccoon who is the product of genetic manipulation and experimentation. Groot, Rocket’s best friend/slash sentient tree/muscle. Gamora, daughter of Thanos. Drax, a murderous psycho from a planet without sarcasm. Together they reluctantly join various causes (theft, prison breaks, galaxy saving, con jobs) while discovering that maybe they aren’t entirely screwed up. 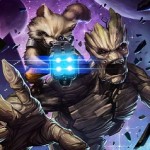 I have to say, for me, Rocket and Groot stole the show. Starlord was good, but the bromance between Bradley Cooper and Vin Diesel made the movie. I can’t recall liking two characters as much as I liked these in this movie. At least not in a while (like Gizmo from Gremlins long time). The movie gave us a real look at Thanos (below) and not just a teaser. If you are familiar with Thanos and some of the Guardian adventures then you will already be familiar with the infinity stones and the gauntlet that they eventually become part of.

The story centers around one of these stones and another cosmic Marvel villain, Ronan. Going into this I was only vaguely familiar with the Guardians and some of the spacey stuff Marvel cooks up. I knew of Nova and the Kree, Ronan and Thanos, and some rough stuff involving Drax. So how true they stayed to characters I can not say. Karen Gilan (left) who played Nebula could have been awful and I wouldn’t know. Judging on it’s movie content and only as a movie I loved it. Though I will say I am not entirely sure I bought into Drax, but I am a little more familiar with him in the Marvel-U versus everyone else.

I saw it with a friend and we both agreed after it was one of the best (we actually said the best) Marvel movies made so far. The make-up, the CGI, the acting, the character relationships, direction, lighting, and score (seriously good soundtrack) were top notch.  Thinking back, and not trying to be all fanboy about it, I can’t think of a flaw. Maybe that the universe is new and just being introduced while Thor, Hulk, and Iron Man are big names even if you are not a comic aficionado. 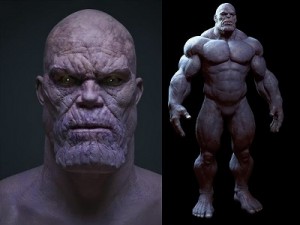 Because the world is just being introduced to you, and they don’t sneak Nick Cage and Agent Coulson in to tie it all together, at times I wonder if the casual movie watcher will follow the story well. Not that it’s a complex story, the characters are complex but the story is fairly straight forward. But toward the end I found myself wondering if Ronan’s hatred for the Nova Corps and Xandar translated. He’s a power hungry fanatic as well so that may be enough even if it doesn’t translate.

All-in-all I give 5 stars. I am going to make my wife and kids watch it tomorrow against their wills. Fill free to disagree in the comments section below or @werewolforigin on twitter