Geek Book Review: The Ocean At The End Of The Lane by Neil Gaiman 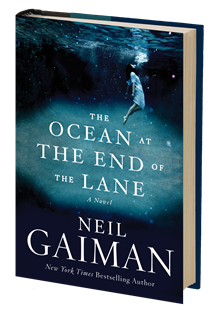 The internet is full of professional and amateur reviews of Gaiman’s newest novel, The Ocean At The End Of The Lane, and I liked it so much that I had to add my own thoughts to the sea of praises that this sweet little novel is garnering.

At just under two hundred pages, it is a book you can finish in one sitting, but it is also a story that you’ll be spending more than one read through on. The nameless adult narrator returns to his childhood neighborhood for a funeral and finds himself wandering the Sussex village during a free moment, and finally heads to a familiar place at the end of the lane near his first home. There he starts recalling the supernatural adventure he had as a seven-year-old boy.

As he stares at the “little” pond by the Hempstock Farmhouse (home to 11-year-old Lettie, her mother and grandmother) that never seems to change the memories come flooding back, and this where the bulk of our story is. Lettie and our narrator bring something terrible back from the outskirts of the field of the farm, a land that has its own time and space.  In fact, our narrator suspects early on that the headstrong Hempstock women are different from any other people he’s known. This doesn’t bother him, they’re warm and kind, full of riddles and knowledge that belong somewhere other than the real world. It will take all four of them to undo the wrong the other-worldly monster has done.

When I first picked up the book, I didn’t know what to expect. It’s very thin, and I’m looking at my copies of American Gods which dominate my shelves… but nothing is wasted. There are no empty pages, no unwanted words. I finished the last page, acknowledgements and book jacket, a little on the sad side. The grand adventure was over, and I found myself wishing that the Hempstocks were real, and they lived down at the end of my lane.

Go ahead, immerse yourself into Lettie Hempstock’s ocean, you won’t regret it. The kid in you wants to know how it all turns out.

Tagged  book review, Neil Gaiman, The Ocean At The End of the Lane.
Bookmark the permalink.