Wizard World St. Louis played host this past weekend to many up and coming local artists and writers.  Those who are looking to make their mark in the comic industry displayed their work for sale and even did commissioned drawings for a small charge.  A group of those local creators have come together to form Archlight Comics and publish not one, but two comic books under their banner.  Legacies End: Celestials and Paladins was created by Jason and Nathan Contini as well as Nicholas J. Hearne. Penciled by Jason, Nathan, and Billy Roach and colored by Jose Segurra and Brian Gross, Legacies End tells the story of an America where costumed superheroes are forced to retain “sponsorship” from either corporate benefactors or the government itself, else they be branded as vigilantes.  The guys at Archlight have also published a kid friendly comic entitled Super Cat.  Created by Jason Contini and Justin Mitchner , penciled and inked by Jason, Chris Hegland, and Neil Basconcillo, it tells the story of a feline superhero and his scientist pal battling evil on a daily basis and doing it in a simple amusing story that they feel is perfect for children entering the comic reading arena.

I chatted with writer/creator Nicholas J. Hearne (whom I have known for some years) about growing up a comic book fan and the impact it has had on his life.  This is what the author had to say…

It’s cool to be a geek in today’s world. I’ve been a geek since birth and it’s finally paying off.  I laugh when I think back at how my mother use to tell me that “TV will rot your brain” or “Comic books are a waste of money”.  Actually, my mother never said things like that to me.  She always encouraged my vivid imagination.  But I’m sure someone’s mother said those things to them!  If not for comic books, I never would have learned to appreciate reading in general. I never would have experienced the wonders of the great authors of our time.  Hemingway, Poe, Vern, Lovecraft, Butcher, King to name a few.  Hell, if not for comic books, I never would have become a writer!  I never would have spent hours upon hours learning story structure, character development, building tension.  Comics are why I am the person I am today and I love being me.

I then asked Nick about Legacies End and what exactly he, along with his collaborators, is trying to say with the book.  This is what he had to say…

Legacies End is a labor of love. It’s a family project.  It’s classic adventure storytelling with spandex.  I’ve been reading and collecting comics for over twenty-five years and in all that time there have been things I’ve loved about the industry and things that I’ve hated.  With Legacies End, I get to cut out the crap and tell a great story.  The characters are all original, created by the Contini Brothers, as well as their father.  Sure, some of them are an amalgam of existing characters everybody knows, but that’s the point.  You’re suppose to look a Aegis and see a little bit of Thor and Captain America.  You’re supposed to look at Knight-Hawk and see a mix of Iron Man and Batman.  We’re not trying to trick anyone.  Legacies End is a melding of everything that is cool about comics, wrapped in an original story that is epic and deep and heartfelt and filled with action!  Legacies End is a love letter to comic books.

I was given the first issue of Super Cat, as well as the first two issues of Legacies End: Celestials and Paladins to take with me and review for our readers here at 8daysageek.com.  I happily did so, and here is my take on these local indie comics. 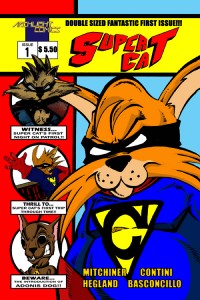 Super Cat is obviously a book intended for youngsters.  The plot is simple and classic, with the feline hero gaining his powers from contact with some extraordinary substances and fighting evil in an attempt to vindicate the loss of his parents a la Batman but with a tail.  Obviously, it wasn’t my cup of tea, but it wasn’t intended for a jaded thirty year-old who has been around comic books his entire life.  It is intended as an introduction to comic books for children not yet ready for the more adult oriented themes present in many major comic books.  The creators have even added “activity pages” such as mazes and a place where children can draw their own panel to help keep the kiddos interested. 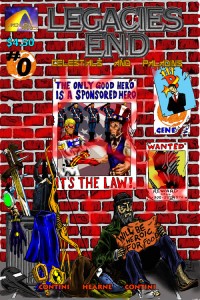 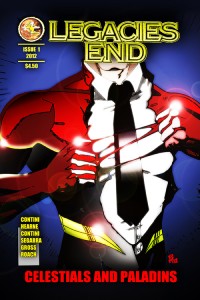 Legacies End: Celestials and Paladins is a book that was far more up my alley.  It was written by comic lovers for comic lovers.  I could attempt to give you the synopsis of the story, but it’s far better to hear it straight from the creators.  Here’s the description from their website…

Genesis, the world’s greatest hero, is dead. The powerful team of heroes that he gathered, known as The Protectorate, has disbanded. The only heroes left in the world have fallen victim to corporate sponsorship and media induced celebrity.

Richard Wallace, the “retired” hero once known as The Last of The Knight-Hawks, has gone underground. Not interested in the fame, recognition, or monetary compensation that goes along with costumed heroes in the world today, Richard and his team of unregistered Masks, along with the few members of the Original Protectorate that will still speak to him, continue to work in the shadows, attempting to reveal the corruption of the Brimstone Corporation.

The heroes have a secret and they believe they have found a way to fix things and restore the status quo to its former glory. But a new Protectorate has been formed, sponsored by The Brimstone Corporation, and old friends have become new enemies. Hunted and on the run, Richard and his rag tag group have only one goal…

The child must survive!

I found the storyline of these books to be very creative, if a little slow to get up and running.  It was reminiscent of a book I recently read entitled Confessions of a D-List Supervillain, but taken far more seriously.  I did run across a few typos or misspellings in the issues I was given, but I’m not going to hold that against an indie comic attempting to get off the ground.  They were especially made up for with what I personally felt was some very good artwork.  Homages to friends, family, and the city of St. Louis pepper some of the panels and I found the covers of both books to be a very good attempt to hammer home the commercialized corporate world that the heroes of these books find themselves in.  The coloring in the books is very vibrant and eye-catching, especially in issue #1.  I found myself lingering on panels and trying to read every sign in the background or every news ticker on a television screen.  Congratulations to the guys at Archlight Comics for creating something they are proud of and that I found enjoyable to read.  If you’d like more information you can follow the link below.

You can purchase these books and many others right here.