Welcome to the world, Cat Daniels

It’s a wonderful idea for a comic, which I discussed here when I first learned about it.

While it’s great to read a comic that I can relate to as a girl, Dr. Brooker and his team have also created a near perfect comic experience. It’s obvious from Issue #1 that they are fans of comics themselves, because they know exactly what to give the fans. The panels are well-drawn, and move along quickly. Even though the issue is the standard 22 pages, it seems much shorter, because you end up wanting more. The story and setting build on what fans already know of comics- cityscapes, background on characters, shadowy figures, and plays with that knowledge.

But that’s just the beginning of the list of everything they get right, and how they’re giving fans exactly what they want: 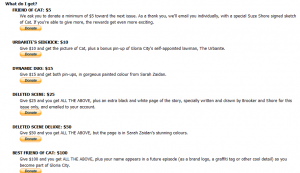 After multiple re-readings of Issue #1, I have only one criticism, and it’s a minor one. Despite the fact that the comic is online, the panels are still formatted like normal, paper comics. This results in sometimes not being able to “see” the whole image at once. 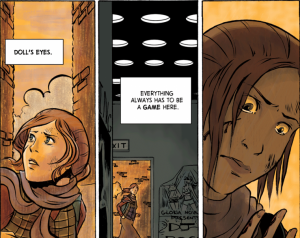 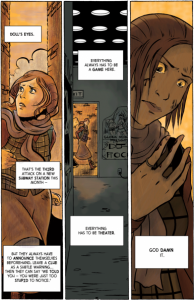 If there are several, smaller panels on the page, that’s less of an issue, because of how you read the panels, but for a scene like the one above, it makes it a little hard to read, and get it all at once. I found myself having to scroll up and down a lot on panels like this. As the comic is online only, it’d be nice to see the creators play with the panels so they are formatted for computer screen size and perhaps step away from paper comic book size.

After less than a week, Issue #2 is already fully funded by fans, and Issue #3 is only $40 away from being fully funded, so hopefully we’ll be seeing Cat soon.

Until then, I’m keep busy by rereading Issue #1 and trying to earn more brain smooches.