Above Suspicion by Helen MacInnes 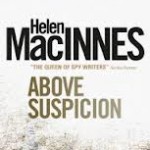 This book was a hit and miss for me. I had some parts I rather liked and a few that I didn’t care for. One of my major problems with this book was how vague it could be at times. I think a lot of the problem was that the omnipresent narrator was not very omnipresent at times as he only followed whoever was away from the action and the safest. This changing focus was not hard to follow but did mean that almost everything seemed to happen off screen only to be revealed later.

The plot at times seemed a little like an afterthought to hold some characters. I won’t say I’m the best at plot work but this just seemed very undeveloped. The idea was there and the characters could hold up but the story never reached what it could. I guess the best way to say it is that as this was her first novel it is not bad. I have read far worse and as such have read much better too.

I would say read it for an interesting look at period literature from during world war two. The war never takes place but is hinted at, constantly. That might be my only other major gripe is that the characters shouldn’t know that a war is truly coming. They should feel it coming but this hinting was just way over the top.

Above Suspicion was compliments of Titan Books.

Buy Above Suspicion here on Amazon.

All in all it was a quick read and didn’t drag very badly so it didn’t take long to read. Though the ending left a whole lot to be desired as it just ends as if a few pages had just disappeared from the last chapter to leave us wondering if everything really did turn out well.