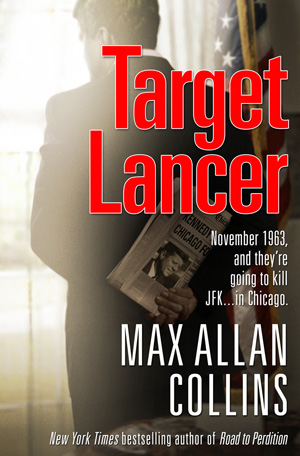 But what if that wasn’t the plan or at least not the whole plan and what if there were more people involved than most people think?

That’s the story that Max Allan Collins tells in his new book Target Lancer.  Target Lancer is part of the Nathan Heller series of books as Heller is the main character of the story.  We start the book off Heller is in his fifties and is not as spry as he used to be.  Heller gets a call from an old friend that needs a favor (trouble); the man needs someone to protect him as he delivers an envelope full of hundred dollar bills to someone in a strip club.  That sounds completely legal right?  Here is a synopsis:

Long before November 22, 1963, Nathan Heller, “P.I. to the Stars,” knows that a conspiracy is in the works. Several years earlier, Heller had been involved with the Kennedys, the Mob, and the CIA in the early stages of a plan to assassinate Fidel Castro. Shortly after, Heller’s Mafia contact is murdered.

After being interrogated by gangsters and contacted by U.S. Attorney General Robert Kennedy, Heller realizes that he may be the one person who can prevent a devastating political assassination. Only he knows all the players; only he knows why a web of conspirators has targeted the man known to the Secret Service as “Lancer,” John Fitzgerald Kennedy.

Wait, what?  That’s right, Target Lancer tells the story of the multitude of characters involved in the “fictional” plot to kill JFK during his Chicago visit instead of his Dallas visit.  There are plenty of real characters in the story including Jack Ruby (the man that killed Oswald), Lee Harvy Oswald, and Jimmy Hoffa.  The inclusion of real world characters and the amount of research done for the book make Target Lancer incredibly plausible.

If you like books that show a different version of history, conspiracy stories, or just great books with plenty of real life facts then Target Lancer is right up your alley.  The story will keep you reading beginning to end and leave you wondering if what you “know” is true or not.