The next installment of the DC Comics series HERO, by Will Pfeifer, takes a turn for the strange; the HERO is transformed from a man into a female superheroine!  This is a new feature and during the transformation the device is lost!  The guy fooling with the device does so in the back of an open-hatched pick-up truck. 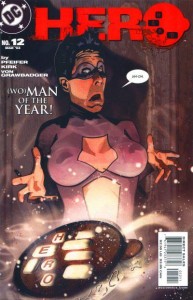 This means that Joe, the main character, is stuck as a six foot tall electrically charged heroine lost in a sea of emotions and feelings he cannot understand.  His initial act is to race home where he is discovered by his girlfriend Amy who, predictably, freaks out.  Not believing the story this crazed super-powered weirdo Amy forces our protagonist out of the apartment.

Knowing nowhere else to turn he/she goes to the apartment of a friend.  Sadly for all involved this friend is a low-life and has a thing for superheroes, specifically those in the poster lining his crappy apartment walls: Wonder Woman, Power Girl, etc.  The friend doesn’t believe the story either, but not to be discontent with the situation invites the woman to relax and have some drinks. 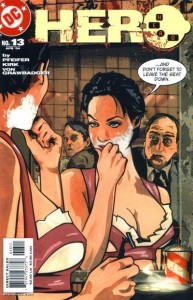 One thing leads to another and…well, you can guess where we end up.

The truly interesting part of this arc is the side-story Pfeifer has been dropping in from time to time over the last few arcs.  It involves a character who has held the HERO device before and we learn now that it came to him as a child.  I feel like I should know the character but can’t quite place him…I’d be interested if anyone else reading along caught who this child was.

We learn something new as well: those whom have held the device for periods of time maintain residual effects of the powers, but they only manifest under duress…similar to some mutant powers.  The character (Bob – villain, former prisoner, current outlaw) pistol whips our first hero in order to make his powers appear and in so doing gains an ally. 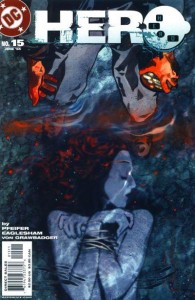 This side-story is bound to come to the forefront before the end of the series; a mere seven issues hence, and I am very interested to see where it goes!