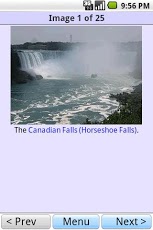 The last three weeks of this article have been pretty intensive. Comparing three of the top mobile web browsers available for Android can take a lot out of a guy, so I’ve decided to take it easy this week and review an app that is pretty straightforward.

That app is WikiMobile. Before we start, yes I know there is a WikiMobile 2, but I have yet to spend quality time with that version of the app, so we will hit the first version this week.  Right out of the gate, this app is pretty vanilla. The UI is, quite possibly, the weakest and most yawn inducing UI I have ever come across. Seriously, it’s that bad. But what do you expect from a reference app? Once you get past the Atari era UI, you quickly see that this is really just a mobile version of Wikipedia. There are no bells and whistles here, nothing special at all. 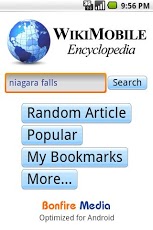 It’s just a simple reference app that tries its best at mimicking its PC counterpart. It does a damn good job of it, too (is that good or bad?). You can choose to get a random article, bookmark your favorite articles, search through the most popular articles, and view images. That pretty much sums up the extent of this version of the app. The only beef I have with this app is that there’s a glitch that occurs when you swipe the page of an article. Sometimes it completely skips over information, so while reading you will get a sentence like “The British Bulldog power slammed…the year 1998 at Wembley Stadium.” It’s quite annoying if you ask me (especially during my reading of the British Bulldog article, my boyhood hero).

The articles read just like a normal Wikipedia article, having the ability to click on links within the article for cross references. So overall, this app is nothing special. It is a simple reference app. But I feel like this should be a reason to make the UI more attractive to the eye. This lack of attention truly hurts this app, and that one annoying article glitch certainly doesn’t help either. That’s why I have to give this app a rating of 3/5.

I’m a lifelong comic book fan. Comics pulled me in at an early age, with influences ranging from Chris Claremont’s historic X-Men run, Walt Simonson’s Thor run, Mike Zeck’s run on The Punisher limited series, Jim Lee’s X-Men, the early 90’s X-Men animated series, and the best cartoon ever made, Batman: The Animated Series. As a kid, these comics and cartoons gave me a new world to go to when the real world wasn’t so nice. Because of this, comic books will always have a special place in my heart. I love everything about comics, and still get the same feeling reading them today as I did when I was a kid. My major in college was psychology, so I love to incorporate that into comics.
View all posts by Steven Brewer →
Tagged  android, android apps, Google, google play, Wiki, Wikipedia.
Bookmark the permalink.