Just as the Presidential campaign is heating up, and elections are mere months away, we get The Campaign. Starring Will Ferrell and Zach Galafianakis, this film follows the life of incumbent North Carolina congressman Cam Brady (Ferrell), and the new candidate, Marty Huggins (Galifianakis). Normally, Brady would run unopposed and basically be given the seat in congress, but due to his falling out of favor with billionaire brothers that are major political funders, he gets to run against Marty Huggins.

Knowing Ferrell and Galifianakis and their sense of humor, I had high hopes coming into this film. While I came out of the film a little bit underwhelmed, I wasn’t completely disappointed. The cast of this film all put in great performances, but I couldn’t help but feel like we have seen this character from Will Ferrell before. Despite this, Ferrell still turns in a solid performance. Zach Galifianakis’ character is great, and gives us a little break from Ferrell’s over the top congressman.  The dinner table confession scene with Marty Huggins and his family is absolutely hilarious. The stand out in this film for me was Dylan McDermott, as campaign manager Tim Wattley. His scenes are few, but they are all memorable and provide a different sense of humor than what Ferrell and Galifianakis have to offer. The film is paced well, and moves quickly without losing you (the plot isn’t too complicated, it’s a raunchy comedy!). 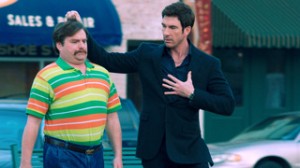 What surprised me the most about this film is that, behind the guise of raunchy, adult humor, there’s a real message. We get to see just how much influence and control big corporations have in politics. I’m sure all reasonable people understand that big corporations shell out billions to insure that their bottom line isn’t affected by what bill the representatives in our government pass or kick out of congress. Thus they try to do all they can to place a candidate in there that will take care of their most precious asset. Throughout the film, you get a real sense of just how much of a role big companies and their big money have during election time. This film does a great job of conveying this message in a lighthearted, but effective way. Actually, this message is what saves the film. The humor is good, but it’s normal faire for Ferrell and Galifianakis. This film isn’t anything different from what we have seen before. Despite this, it is still a funny film, and the message hidden behind the laughs is what keeps you from feeling like you wasted your time.

I’m a lifelong comic book fan. Comics pulled me in at an early age, with influences ranging from Chris Claremont’s historic X-Men run, Walt Simonson’s Thor run, Mike Zeck’s run on The Punisher limited series, Jim Lee’s X-Men, the early 90’s X-Men animated series, and the best cartoon ever made, Batman: The Animated Series. As a kid, these comics and cartoons gave me a new world to go to when the real world wasn’t so nice. Because of this, comic books will always have a special place in my heart. I love everything about comics, and still get the same feeling reading them today as I did when I was a kid. My major in college was psychology, so I love to incorporate that into comics.
View all posts by Steven Brewer →
Tagged  Movies, review movie, snl, The Campaign, Will Ferrell, Zach Galafianakis.
Bookmark the permalink.