I’ve been going to comic book conventions for a long time.  Some have been good, a couple great, many more bad.  I’ve spent my time in Radisson hotel ballrooms with panel’s taking place in glorified closets and vendors out in the hallway.  Wizard World Chicago 2012 was a considerably improved version of its last three incarnations.

I won’t kid you, there are still issues with setup and layout and the fact that “regular” people still have to walk through a completely separate entrance, through a back-room area (complete with extra chairs, table covers and whatever else hides in the depths of the Donald E Stevens Convention Center) is utterly ridiculous.  And I say this as a member of the press who got to walk in through the “VIP” entrance.

Something I learned a long time ago is not to compare one convention in one location to another.  So I will only compare this WWC to previous WWC’s.  It’s not fair to compare it to C2E2 and to do so would be a disservice to both. 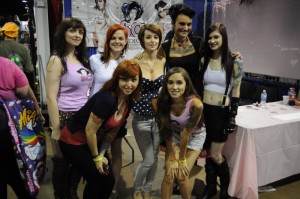 First, the cons: the entrance system, which was already noted and talked about last year (including a nifty drawing).  Then there was the seemingly disregard for Artist Alley.  I want to imagine that it was not the intention of the event planner for WWC to create such havoc for those in the Alley, but clearly that’s what happened.  I realize that retailers bring a higher fee for their floor space because they’re taking up larger areas, but the new layout was bad and showed little desire to have people back.  Clearly the new design upset certain people enough not to come, such as Top 10 artist and Chicago native, Gene Ha.

The pros: more, better shops.  The last few years of WWC had seemed more like a swap-meet than a comic book convention.  This year saw the return of quality sellers offering decent deals.  Which was an upgrade over what I thought was a dearth of comic book vendors at C2E2 in April.  The placement of the main celebrities was definitely better.  Sure it was in the middle of the space, but that made it relatively easy to avoid and it didn’t really spill out into the other aisles.  Plus, celebrities are what drives the non-comic related fans to the show, so I am all for letting them be promoted.  Lastly, the aisles themselves: much wider and a cleaner feel to the flow of the crowds.  This was the first time I can remember not getting completely trapped in a crowd on a Saturday, ever.  Of course I ran into roadblocks and had to find alternative routes, but those routes existed, unlike in years past. 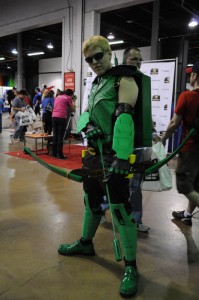 I feel that Wizard listened to the complaints of the people.  They brought in better guests for panels.  They made the layout better (for the majority of the part).  They clearly brought back better vendors.

I am proud to say I was a part of this year’s WWC along with another member of the 8 Days A Geek staff.  We each moderated panels (he 1, me 3) and it was a blast.  The crowds were engaging and the guests were entertaining and very kind and welcoming.

As with anything, the con wasn’t perfect, but Wizard did well to improve on issues that have existed in the past.

I want to give a special shout-out to Brandon Williams who did a kick-ass Sam Trammel panel, Thalia from the Wizard World staff who did a great job managing the panels and Amber Jarazzi from Wizard who was in charge of all the panels and moderators.  Each of them was great and I couldn’t have asked for a better group of people to have worked with.

I’m greatly anticipating WWC 2013 after the events of this year, if only because I think they’re headed in the right direction and I’m excited to see how the con improves.

Next week I’ll be back with my latest Bin Fodder comic review.