In what can only be described as a serious disappointment The Authority comes to a close with a whimper.  Without Ellis to guide the ship after issue twelve things started to get a little hairy.  Marc Millar, to his credit, attempted to go in a different direction; to make the comic his own.  I applaud the effort; I shake my head derisively at the execution.

It doesn’t help one damn bit that these last set of issues had various writers, with no one writing more than two issues in a row.  This creates huge gaps of divergent storylines and character’s acting out of character without explanation and without fulfillment since the series ends. 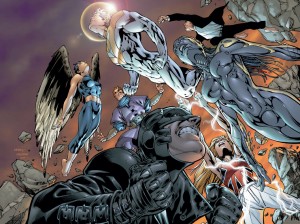 The thing that really annoyed me about this final run was: they killed off the team.  You read that right, they killed The Authority.  They were supplanted by characters possessing similar skills to theirs; having been created by world powers who didn’t like how the team was comporting themselves.

All the differing and divergent storylines that looked to come to a head as the serious concluded failed to reach their potential.  Which probably explains why there have been several iterations of the team since; none of which captured the skilled, stylistic motif set forth by Ellis.

Rarely do I bash a book I choose to read here in Bin Fodder.  Partially because I tend to read books I already know and enjoy, but also because even recommendations given to me have been quality.  And, as I stated above the Ellis run for the first twelve issues was solid, it’s post-Ellis that the failures occurred.

The worst part is: I wanted to enjoy the book.  I kept turning the pages, moving on to the next panel, hoping, praying, believing it would get better.  It did not.

Overall I rate The Authority a C- because whereas the first section of the book was great, the pathetic nature with which this book was concluded drags it down precipitously.