We’ve come to it, at the last, the conclusion of the epic epoch that changed the Hulk forever! (or well, at least for a few months, which is basically forever in comics.)  Planet Hulk Allegiance concludes the story of how the Hulk leads the commoners and slaves of Sakaar against the Red King. 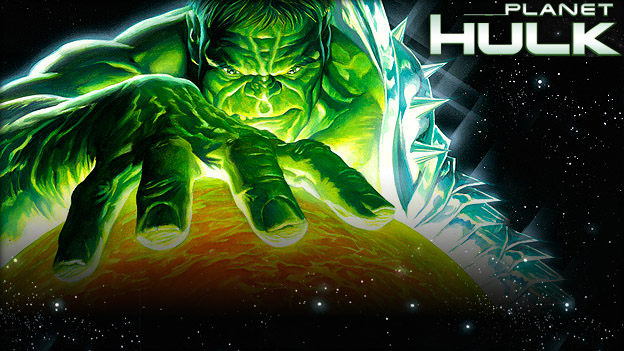 Allegiance begins with issue 100 of The Incredible Hulk which is a mega issue and when you pick it up you’re excited because you imagine that its 100 page spread will be mainly devoted to the current storyline.  But that excitement is short-lived when it turns out that the Allegiance portion is a standard issue.  The rest is an assortment of random Hulk stories, some more recent and one rather ancient. 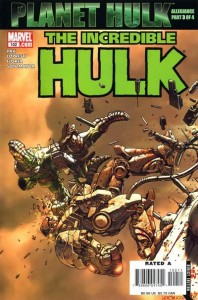 But moving past this minor disappointment wrapped in the tasty taco of an amazing story, Planet Hulk Allegiance focuses on how the Red King’s own Shadow the Oldstrong, Caiera, sides with the rebels against her king after seeing the evil he has brought upon the world.

The story of the Red King’s downfall is a mishmash of random events and seems to happen almost too quickly and easily.  It’s nearly as if the writing team just wanted to have it over with by the time they got to it.  His death, though interestingly conceived, is predictable and a less-than thrilling moment in the story. 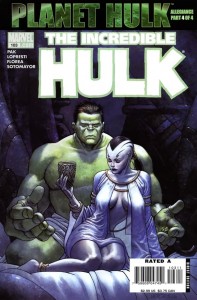 Over time a relationship, first of respect, then of friendship and then of affection grows between Caeira and Hulk.  He even shows Banner to her.  But in the end, it is all for naught.

Hulk was, of course, destined to return home to Earth.

Hulk is named King after he does away with the Red King and sets to helping the world of Sakaar rebuild.  During the first few days of his reign the Hulk sends his top lieutenants from the war out to the various factions throughout the world.  It’s his hope of unifying the planet, not under his rule, but under the banner of freedom.  But as clean-up work goes on in the capital the ship that brought Hulk to Sakaar is unearthed and all the damage caused by the recent trauma of near-planet destruction causes the engine core to rupture. 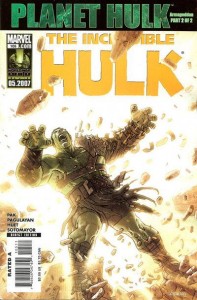 Hulk, reacting with a keen understanding of what is about to happen, grabs the ship and throws it skyward.  But time is not on his side.  The explosion is seen from miles around.  A bright flash in the daytime, like nothing the inhabitants of Sakaar have ever experienced before.  Everything and everyone near ground zero in the capital city are turned to ash.  All, except Hulk, of course.

His love, killed, murdered by those annoying “pinkies” the humans, Hulk decides to take the fight to them.  He takes an ancient ship, used in the war, towards Earth and he’s right pissed.  This is the launching point of the next storyline World War Hulk.  I was significantly less impressed with where that took the series.

The Planet Hulk storyline is one of my all-time favorites in Marvel comics.  The pleasantness of it comes largely from the fact that its quality was unexpected.  I’d never been a fan of Hulk before (or much since) but this story captured my attention so completely.  Overall Planet Hulk gets an A grade.  You should ABSOLUTELY read it. 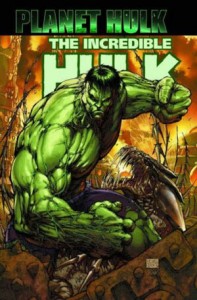