…and another Free Comic Book Day done, under the belt, conquered and accomplished. Some consider it cheating to double dip or run from shop to shop grabbing up all the FCBD shwag you can get your hands on. I am torn on the issue. I have jumped from shop to shop before to get as much as humanly possible. I’ve also seen the sad disappointed look in my eyes (looking into a mirror obviously) as I arrived late after a long dreadful day of Saturday work (the absolute worst. I’m convinced that if there’s a hell, 6 of the 7 days in a hell-week are Saturdays where you work)  and there is no more copies of the TMNT reprint or War Machine Heroclix left. You know, just deep down, you know it is because people who don’t even play Heroclix were rushing around snagging up all they could. I had to jump around one year. My regular shop had a 5 item cap on the schwag and I needed all three of the Lanter Rings plus War of the Supermen #0 and other things I can’t remember. So I got my five and double-timed it down to Starbase 21 for the other rings. So I get it. Is it wrong, who’s to say. I suppose the Shadow knows but even he might turn a blind eye to the needs of a participant of FCBD. 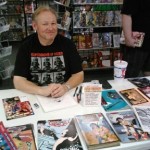 This year I only hit Wizards on 71st and Mingo in Tulsa, Oklahoma. I guess I was a sort of cheater as I brought the whole fam, and combined we got 20 free books. 22 if you count the free books Mike A. Kennedy was signing and giving out as well. I don’t feel like a cheater though, because my kiddies, Evan (8) and Dax (6), have been reading Tiny Titans and Batman Brave and the Bold more and more lately. All ten books they grabbed were books I won’t read; they really are their books. Still felt weird going through checkout with 22 comics that I wasn’t paying for. 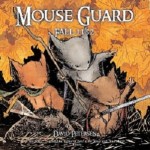 The Pièce de résistance was Mouse Guard. Raising the Free Comic Book Day bar to new heights with their hardcover issue. I’ve read Mouse Guard on and off and it’s pretty good story wise and ABSOLUTELY AMAZING art wise. This will be the second hard cover Mouse Guard in my collection and it was free. I love it. 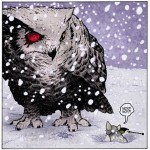 Other than the Mouse Guard though, the over-all haul felt a little lackluster compared to the Lantern Rings of FCBD past and The Astounding Wolfman #1 which is done by the brilliant Robert Kirkman. Most of what I saw today were books I had never read, don’t read, or collections of samples and previews for next year. Still an eventful day, wading through the line, picking my prizes and having a nice convo with Mr. Kennedy about comicing and how to break into the biz. So until next year FCBD, thanks for the goodies, and you are a brilliant Geek Holiday.