My better half told a story today about how two “nerds” were overheard on campus today arguing over rather or not Tuvok was dead and if he might have really just been a hologram the whole time. In the end they turned out to be something other than Trekkers discussing the Vulcan Tuvok. The supposed geek convo was really about the surprise at Coachella, a Valley Music and Arts Fest held on Friday April 13th.

The event was broadcast for three days live on Youtube and that Sunday viewers were treated to an amazing surprise as Tupac Shakur made an appearance via FUTURISTIC FREAKING HOLOGRAM! The 16-years-deceased rapper performed a duet with former friend Snoop D-O Double-G thanks to Dr Dre, Digital Domain, and AV Concepts. I just saw the video and it was the most amazing holographic image I’ve ever seen outside of science fiction. 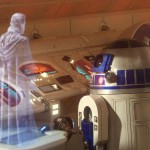 Why in the world did it take Dr Dre to push this into the light? I should have been fighting beasts and hanging out with sexy ladies on holodecks years ago. George Lucas and James Cameron have sunk all their money into the wrong medium. Who cares about THX quality sound and underwater 3D when Dr Dre has the ability to bring people back from the dead with mirrors and a laptop? I know it wasn’t a true hologram (it was what’s called a Pepper’s Ghost, which is just a trick with light reflecting off glass) but I don’t care. I’ve actually seen this trick done before at the Tulsa Zoo, where you look through a box and push a button, magically a log turns into a rock right before your eyes. It looks totally real. A thousand years later someone finally thought to project a full bodied apparition? Okay. I know people have done that already too, but this was the best one I’ve seen. It was the combination of old footage remastered, spliced with CGI effects, and combined with Snoop that did it. Thousands of people watched and had their minds freaked by this amazing imagery and it had to have been amazing. Live. At a huge festival with all the excitement. Then BAM! Tupac back from the dead. I can only hope we see more of this craziness soon. Now get me a holodeck and that machine that makes the food… and tell David Blaine he’s freakin’ fired.

Writer/Artist for X amount of years. Recently worked with people from IGN on a comic and studied writing under Victor Gischler of Marvel Comics at RSU in Oklahoma more X amount of years ago. Follow me @WerewolfOrigin on twitter
View all posts by Eric bookout →
Tagged  coachella, hologram tupac, holopac, tupac.
Bookmark the permalink.