I really shouldn’t… oh but I should. This was one of if not the best adaptation I have ever seen. Before, I would have said Red Dragon, and at a distant seventy-sixth, Eragon. I read the books last December. It took me four days to finish all three. The characters were very captivating and the world was so reminiscent of an Ayn Rand story, or Bioshock, or that movie with Christain Bale where they do the gun-kata, that I loved it. That post-apocalyptic totalitarian atmosphere comes with a feel that just draws you in. When I’m feeling rebellious it pushes that “raise my fist and resist” urge inside and I want to join La Résistance. The books captured all of that (with a few flaws near the end in book three that felt very anti-climactic) and tied it up in with the same young adult approach so many other successes have swelled with lately. I felt they were a welcome addition to the likes of Harry Potter or (like-it-or-not) Twilight. I try to find stories to feel that void often. I tried with The Golden Compass and it was close. I wanted Twilight to be good and feel the role. The Inheritance Cycle met the need. Last December in four fevered days three books by Suzanne Collins fell so perfectly into that want for another Potter series or Inheritance Cycle it was like they had always been meant to exist there. 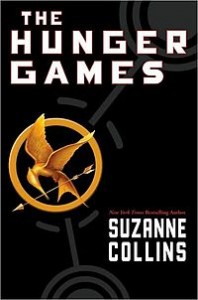 Adaptations are very hard to pull off. You can try and cram everything from the source material in to appease the existing fan base, you can go your own route and try to tell the best story possible only using the source material for characters and namesake, and very rarely can you get it just right. The Hunger Games movie really did though. I am usually so critical about these things. Don’t get me wrong, there are plenty of things I could pick apart; Haymitch doesn’t come across as a washed-up drunkard, the love triangle is there as an afterthought really, and the mockingjay pin wasn’t given to her by Greasy Sae. Rue was barely with Katniss long enough to draw out the emotion. Peeta’s leg injury wasn’t so bad. Judging by the age of Katniss and Peeta in their shared flashback he must have given her that bread a week before the reaping which they should both remember very well. You don’t forget the kid who tosses dirty burnt bread at you while you’re starving and pouting against a fence post in his yard in the rain. It just doesn’t happen. Yet Katniss was all, “you were the boy with the bread…” like it just dawned on her. Forget all that though. Even with all the extreme close-ups and shaky camera angles this captured the feel of the books and included just enough of the details and story to appease the fans (I say this because I am a fan of the books and was appeased). President Snow wore a white rose and was trimming roses while talking to the game maker. Katniss stressed to her mother, “you can’t fall apart again…”. She shot the apples and caused the explosion. There was a cornucopia in the middle of the games and mutts at the end. The map of the arena even looked like the map I drew for my wife to show her my idea of how it looked. It was really close to the book and only cut out a few things that were likely unnecessary for the story to function. So the solid good story was there in its entirety and the atmosphere was there too, like glaze on a donut or fog in London. 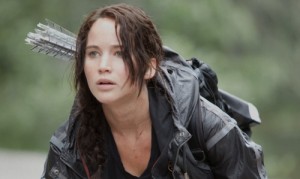 The cast was amazing. Jennifer Lawrence played Katniss flawlessly. As a young Mystique there were a few lines in X-Men: First Class that never sat well with me. It could have been just that I never saw her growing up to be Rebecca Romijn. But as Katniss I had no problem believing she’ll grow up to be Rebecca Romijn, or the champion of district 12. Haymitch wasn’t drunk enough but Woody Harrelson can do no wrong. And I still have trouble believing that was Elizabeth Banks as Effie. Donald Sutherland almost stole the show with his limited scenes and villainy. 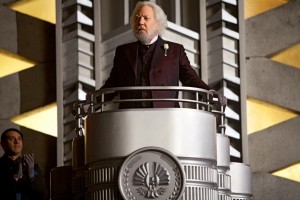 I’ve asked around and even the people who have never read the books still enjoyed the movie… All of them. Not one person hated this movie. I’m sure that’s not true. I know my grandma would have hated it, but she’s a horrible racist. With huge box office numbers, the third highest opening, it’s already a success and I’m sure we’ll get sequels. And I think it deserves its success. 150 million in ticket sales agree with me. So I’ll recommend it; for the atmosphere and the acting and the just really really good story that it is. Okay, I’ll try and never sing praise like this again, but this was worth it. The End.

Writer/Artist for X amount of years. Recently worked with people from IGN on a comic and studied writing under Victor Gischler of Marvel Comics at RSU in Oklahoma more X amount of years ago. Follow me @WerewolfOrigin on twitter
View all posts by Eric bookout →
Tagged  Hunger Games, review movie.
Bookmark the permalink.