The Mystery of Dr. Fu-Manchu Review 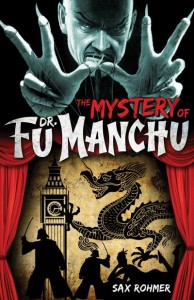 This is not going to be a review, just being honest; this book is going to be close to a hundred years old soon and has aged well in my opinion. This is also why I won’t bother really reviewing it as there isn’t much to say that hasn’t been already said. What this is going to be is more my recommendation that you pick it up and read it. The character of Dr. Fu-Manchu is one of huge historical significance and has without a doubt influenced literature ever since his introduction so long ago. In a way he has shaped modern story telling in almost every way.

Now I am sure you are saying in some dramatic voice where can one procure a copy of this opus? Well, lucky you! Titan Books will be very soon putting out a rerelease of this fantastic story and have plans to follow up with all the sequels written by Sax Rohmer.

So everyone go out and do themselves a favor and pick up this book and give it a read and see just what inspired so many of the comic writer, film makers and current authors that you so admire! The story is well paced and with good dialog. The characters are timeless and easily brought to life. I easily buzzed through it in a day but I devour books at a crazy rate so your mileage may vary based upon weather and road conditions and I suppose the octane level of gasoline used and general up keep of your vehicle… dang it I was rambling again…

See you all next time!