One of the best things about writing Bin Fodder is that it gives me an opportunity (read: excuse) to dive deep into my collection and pull out books I haven’t read in a long time.  Such is the case with Image Comics’ 90s series Weapon Zero. 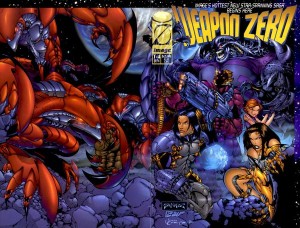 Let us return to a simpler time when teams were pre-formatted and creators didn’t have to pretend to be original.  Zero fits the mold of many other Image/Top Cow books from the mid-90s (like Cyberforce, a personal favorite of mine that I reviewed in my first ever Bin Fodder).

Weapon Zero’s initial five issue mini-series launched with issue T-4 and counts down to issue 0.  Strange numbering systems were one of those things comics used to do to be interesting and inventive.  We never see that now, do we?  (I’m looking at you Marvel and your constant re-numbering!) 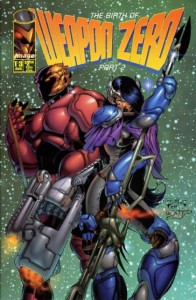 As far as plots go, Zero has an interesting one: the universe is incredibly old and Earth humans have existed for barely any of it.  But what if the seed of humanity rested not in microorganisms or a higher power, but in race of humans from beyond the stars?

In the first issue of Zero we are introduced to the feuding races of the Batai and T’srri.  As is requisite there is a good and an evil faction.  The Batai are inherently good, as they are shown to have feelings and honor while the T’srri are shown to be evil both in design and in attitude.  In this issue we are witness to the last battle between these two races in our universe.  It results in two massive battleships colliding and subsequently crashing to earth (shown as the impact which caused the destruction of the dinosaurs – I do always love the random dinosaur extinction crossover).

As the mini-series continues the main characters are introduced, each coming from a different era in human history, ranging in gender and age.  Apparently (though not explicitly laid out or even explained) the T’srri, from their secret and mostly decomposed Moon base, had been collecting humans at random from Earth to be put in stasis and modified to become T’srri warriors.

It turns out the Batai did not abandon Earth.  Well aware that the T’srri could return and that humanity would need their protection the Batai planted members throughout society (at least that is implied, though in this mini-series we only see one such person and she dies within 15 panels of her introduction).  She, Lorelei (called Annalee in the first issue) is wife of the future leader of the Weapon Zero team, Tyson Stone.  She aids her husband, as best she can, and provides him with the powers of the Batai.

The plot of the mini-series is far reaching: N’Golth, the T’srri leader on their Moon base, awakens his armies with plans to open the trans-dimensional gate and return their people to this universe with thoughts of continuing their fight with the Batai.  However, this plan has several flaws and even when he succeeds, the emissary that comes through “fails” to see N’Golth’s vision and abandon’s him to his fate.

Each issue is fraught with battles and classic 90’s comic imagery like the constant yet always unnecessary (and often impossible) contortion of female characters to embellish their figure.  The dynamic of the characters, though not truly explored in these issues, is strong due to their mitigating circumstances and desire to survive.  And though the team make-up is cookie-cutter for the era, the characters themselves are not which makes up for a lot of it. 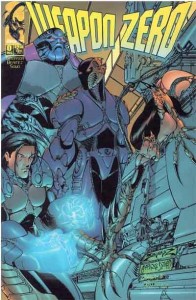 Another fun thing about reading these issues is the advertisements for other Image/Top Cow books of the time.  Amazingly bad crossovers and failed spin-off series; it truly was a grand time in comics when nearly anything could get produced.

Check back next week for my continuing review of Weapon Zero when I move into the ongoing series.