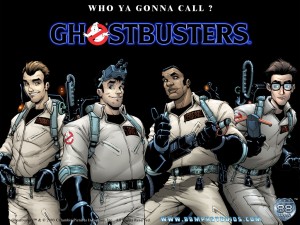 It’s that time again, Bin Fodder is back with a vengeance!  In this week leading up to Christmas it’s hard to think of a better way to celebrate than with a classic movie franchise come-to-comics: Ghostbusters. 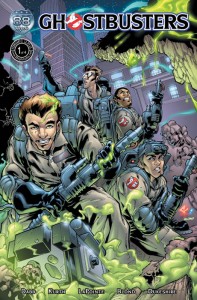 Set six months after the events of the first movie when the Ghostbusters defeated the Stay Puft marshmallow man and Gozer the destroyer.  As a big fan of the movies I read this book with a critical eye on several facets.  First, how is the pacing?  Second, is the humor and solid dynamic between the characters there?

In both cases it was a resounding yes.  This mini-series is very well written by Andrew Dabb (probably better known for his work on the tv series Supernatural).  Dabb does a good job of setting the undercurrent of the story (the ‘Busters dealing with their waning popularity in the face of the day-to-day drudgery of ghostbusting) against the main story.

The set up for the main story of Legion is solid.  When Peter, Ray and Egon were in college there was a fourth member of the group: Mike.  Mike was more…in tune…with the afterlife.  He had grown up with imaginary friends who weren’t so much imaginary as they were ghosts.  During an experiment designed to prove the theory of a spectral plane that could be tapped into, something went wrong and Mike bore the brunt of the psychic backlash.  It drove him insane and he nearly killed Ray during the outburst immediately following. 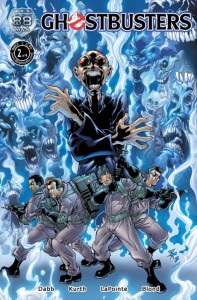 Mike has spent the last years convening with ghosts and they’re pissed.  The Ghostbusters are a danger to the spectral community so they enlist Mike’s help to shut them down.

The one negative about this story is that the build up to the altercation with Mike is a little slow (at the pace it went a six-part mini-series would have worked better) but the time isn’t wasted.  It’s spent exploring Louis’ newfound fame and fortune and his hatred for Peter’s relationship with Dana.  At one point Louis offers Peter two million dollars to not go out with Dana, which Peter promptly rejects, a softer side of Peter!

Overall Ghostbusters Legion is a good read.  Even if you’re not a huge fan of the franchise you’ll still be able to find a good laugh or two out of the continuing adventures of this whacky cast.  It’s worth picking up if you can find it at your local shop in the back issues or through the link above.

Check back next week when I take on another new title!